Hanwha chairman goes back to the office

Hanwha chairman goes back to the office 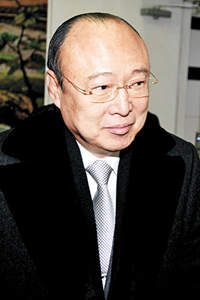 Hanwha Group Chairman Kim Seung-youn has returned to his office as the conglomerate emphasized that it is fully prepared for the acquisition of four affiliates sold by Samsung Group.

On Thursday afternoon, Kim was seen at the group’s headquarters in Janggyo-dong, central Seoul.

Since he was released from jail in February, industry observers and chaebol watchers were speculating when the 62-year-old tycoon would return to his office and what his duties would be.

“Chairman Kim visited the headquarters today not for official group work but because of a personal matter,” said an official from Hanwha Group. “Actually, he visited headquarters several times after he was released.”

Hanwha Group has been under a cloud since Kim was investigated by prosecutors for breach of trust in 2010. In 2012, he was sentenced to four years in jail, but was later released due to deteriorating health.

Kim officially became a free man last February after the Seoul High Court handed down a three-year prison term suspended for five years. Kim was also ordered to pay a 5 billion won ($4.6 million) fine and carry out 300 hours of community service. As no one appealed the ruling, he was released.

Kim retired from the CEO positions of seven Hanwha affiliates including Hanwha Chemical and the holding company Hanwha Corporation, saying he needed to recover his health. But starting last summer, he started appearing in public. He watched his third son Kim Dong-seon compete in an equestrian event at the Incheon Asian Games.

Hanwha Group has been saying it didn’t know when Kim would return, but there were signs that his return was imminent. One sign was last week’s big deal with Samsung Group to buy four affiliates.

The group also conducted a president-level reshuffle last week, the first time in four years. The group has lately been reshuffling their presidents in late February or March.