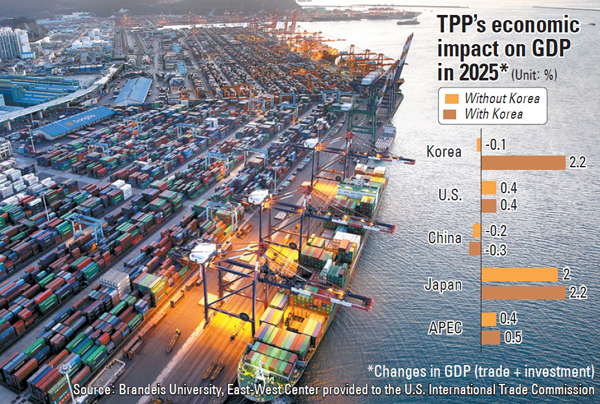 Han Duck-soo, chairman of the Korea International Trade Association (KITA), said on Wednesday it is time for Korea to prepare to join the Trans-Pacific Partnership (TPP), as it would level the playing field with Japan and other competitors and boost Korea’s gross domestic product.

“Now is the time to really put forth an effort to join the TPP. Failure to join the mega FTA would severely hit Korean trade and further hurt the entire economy,” Han said at a press conference on Wednesday in central Seoul.

“Following recently sealed free trade agreements with China and New Zealand, FTAs with Australia and Canada were finally accepted by the National Assembly on Tuesday night.”

The government expressed interest in participating in the partnership in November 2013 but has not said it would join the TPP.

Korea recently concluded an FTA agreement with China, which is pushing Seoul to participate in the Asian Infrastructure Investment Bank.

By joining the TPP, Korea would see a 2.2 percent increase in gross domestic product by 2025, according to a study by Brandeis University Prof. Peter Petri that was submitted last year to the U.S. International Trade Commission.

The members account for about 37 percent of the world’s GDP and 30 percent of foreign direct investment.

“Korea already has massive demand from the 12 TPP members for completed products worth $9 trillion and materials and parts worth $2.2 trillion,” said Han. “But the problem is that Japan makes similar products. If only Japan joins the group, then obviously TPP members will buy from Japan.”

TPP countries will not levy tariffs on materials and intermediate goods produced by each other.

According to KITA, TPP members procure about 5 percent of their intermediate goods such as materials and parts from Korea and 6 percent from Japan.

Han said it would be natural for Korea to join the TPP as it already has free trade agreements with all of the member countries except Japan and Mexico.

However, he warned that Korea must enhance political and private-sector relationships with the United States as the country’s trade authority seeks guidance from the private sector when finalizing free trade agreements.

He noted that the Korea-United States FTA was settled successfully thanks to the support of nearly 97 percent support of the American private sector.

“Japanese automakers are having a hard time in the United States mainly due to the political discomfort between the two governments. Korea shouldn’t repeat that,” said Han.

“Also, Korea should listen to the voices of American business and consider easing regulations. I recently met various scholars and trade officials in the United States, and businesses there were complaining that Korean regulations on issues like carbon emissions and personal information were too tough.”

Han predicted that Korea will have tough year in 2015 mainly due to low economic growth - which he called “the new normal for the world economy” - and other external risks such as rising U.S. interest rates and the steadily weakening yen.

KITA has a positive forecast on Korean trade for next year, with exports estimated to jump 4.3 percent to break the $600 billion mark for the first time and imports forecast to jump 5.5 percent to $557 billion.