Bale finds inspiration for ‘Exodus’ from ‘Life of Brian’

Bale finds inspiration for ‘Exodus’ from ‘Life of Brian’ 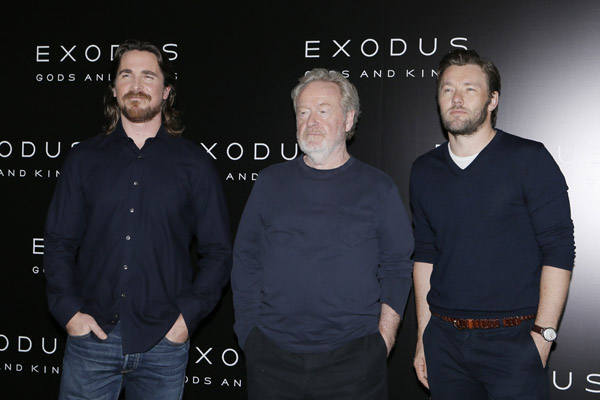 Actors Christian Bale, left, and Joel Edgerton, right, pose with director Ridley Scott during a photocall for his film “Exodus: Gods and Kings” in Paris on Tuesday. [REUTERS/NEWS1]

PARIS - When Christian Bale landed the part of Moses in Ridley Scott’s “Exodus: Gods and Kings,” the latest epic from the British director, he found unlikely inspiration in Monty Python’s irreverent comedy film “Life of Brian.”

Bale, 40, had just finished filming “American Hustle” and was not in the best physical shape to play Moses, who was personified by the commanding figure of Charlton Heston in Cecil B. DeMille’s “The Ten Commandments” in 1956.

“I thought ‘not gonna do that.’ And I gave Ridley a fright because [Heston] was the iconic image of Moses, the long hair and the beard ... and I had just made ‘American Hustle,’ and I walked into his office and I was shaped like Santa Claus, but I’d shaved my head with a razor.

Although he did watch “The Ten Commandments,” Bale said he first turned to the 1979 comedy “Monty Python’s Life of Brian.”

“After Ridley came to me with the insane idea of playing Moses, I first didn’t visit ‘Ten Commandments.’ I first went to ‘Life of Brian’ and I went to ‘History of the World’ with Mel Brooks,” he said, referring to another parody, in which the American comic plays Moses.

“Life of Brian” worked as an example of what should be avoided in playing such roles, Bale said.

“It’s very easy when you’re making a film that has this sort of weight to it, you could unintentionally start making ‘Life of Brian.’

“We had takes when it became a bit Monty Python, it was good because we knew we had those red flags.”

It was also an emotional outlet.

“Moses is such an intense character that you need to have a little break from him,” Bale said.

“So we’d always ‘look on the bright side of life,’ thinking ‘He’s not the Messiah, he’s a very naughty boy.’ It just helped me,” he said, quoting famous lines from the Python movie.

It will be released in the United States on Dec. 12.