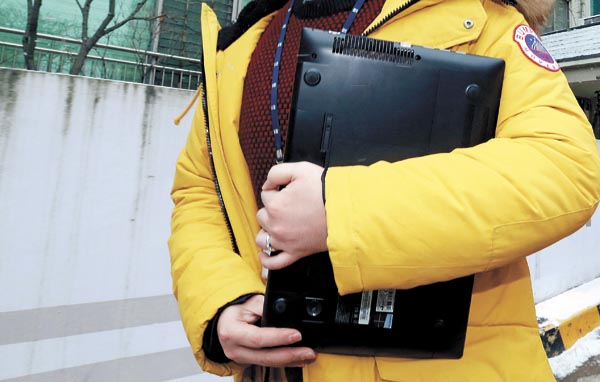 An investigator from the prosecution confiscates a laptop computer on Wednesday from the house of Park Gwan-cheon, a police officer who wrote the internal report and is suspected of leaking it. The prosecution seized two laptop computers, a USB memory card and documents from his house. By Kang Jung-hyun

Prosecutors raided the Seoul Metropolitan Police Agency on Wednesday as part of their widening investigation into the leak of a presidential office report, which details an improper intervention by a former aide to President Park Geun-hye in domestic affairs through a meeting with Blue House secretaries.

The Seoul Central District Prosecutors’ Office also raided the Dobong Police Precinct where Park Gwan-cheon, a senior police officer who drew up the document and is suspected of leaking it outside of the Blue House, currently works. His house was also searched, and documents and computer hard drives seized.

The scandal surrounding Chung Yoon-hoi upended the political establishment this week as questions have increased over whether Blue House officials were really briefed by the former aide and received instructions from him in the decision-making process, mainly on the ouster of Kim Ki-choon, the presidential chief of staff.

Chung holds no official position in the Park government.

The raid came after the presidential office asked the prosecution to look into whether the author of the internal report violated the law on the management of public records.

Park has admitted to writing the report but denied that he leaked it.

The senior police officer left his home early Wednesday morning before the raid.

In the report, Park wrote that the 59-year-old Chung was collecting information and had discussed state affairs, including the possible retirement of the president’s chief of staff, in meetings twice a month with 10 Blue House officials and related figures, including the three secretaries the report referred to as the “three doorknobs.”

The explosive revelation was touched off when the Segye Ilbo ran a story last Friday that quoted content in the leaked document entitled “Current activity of the VIP’s confidant [Chung Yoon-hoi] and rumors about the replacement of the Blue House chief of staff.”

VIP refers to President Park. Eight Blue House officials referred to in the story as the president’s 10 close aides filed a libel suit against reporters at the paper on the same day.

Since the scandal began, Chung has denied the allegations against him and claimed the document is merely a collection of groundless rumors, saying that he has stayed out of politics since he quit working as the chief of staff for Park when she was running for president in 2007,

Amid swirling rumors about how and why the document was leaked and questions over the credibility of its content, the main opposition party has ramped up its demand for a special prosecutorial investigation into the case and a special parliamentary probe, saying it will only guarantee a fair inquiry independent of pressure from the Blue House.

Veteran Rep. Park Jie-won, a member of the New Politics Alliance for Democracy, went further to call on those implicated in the scandal, including the chief of staff and the president’s three confidantes, to step down to ensure an independent and thorough investigation.

“How could the prosecution investigate the presidential chief of staff and the ‘three doorknobs’ on top of the power structure?” he said. “They need to resign so that the prosecutors can carry out a full investigation.”