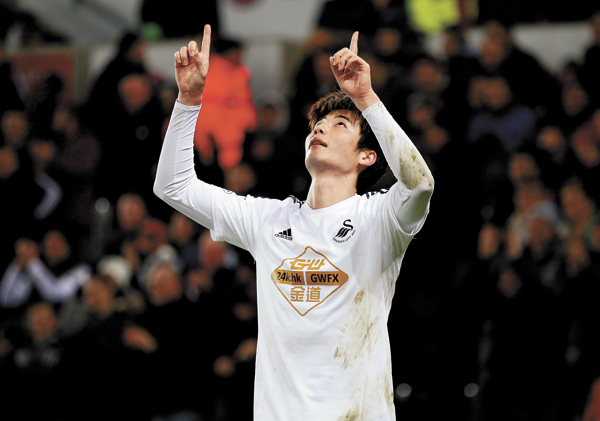 
Some enthusiastic English Premier League fans had to wake up early on Wednesday to watch the season’s first “Korean Derby” between the two remaining Korean premier leaguers, Ki Sung-yueng of Swansea City and Yoon Suk-young of Queens Park Rangers (QPR).

The winner of the first derby was Ki. He broke the game’s deadlock by scoring his second goal of the season in the 78th minute to lift his team to a 2-0 win over QPR. The eighth-ranked team also moved up two notches to sixth, ahead of Arsenal and Liverpool.

The match was fast paced from the start. QPR’s Niko Krancar had a free-kick in the second minute that looked threatening enough, but missed the net by inches.

Swansea had a shot soon after. Left fullback Yoon lost Wayne Routledge, who then got a one-on-one chance, but his effort was saved by veteran goalkeeper Robert Green.

Midfielder Ki played well in the first half, but not well enough to score goals. He intercepted a goal-kick from Green in the 15th and tried to penetrate into the QPR defense with a one-two pass, but the ball was blocked by defender Richard Dunne. Ki made a mid-range effort in the 23rd, but it went wide.

Swansea City kept trying to make chances in the first half, but Green was always there to save his team.

The goalie blocked Kyle Bartley’s header in the 8th and also scrambled to keep the ball out after Gylfi Sigurdsson’s effort deflected off Joey Barton in 23rd.

In the 37th minute, Sigurdsson had a free-kick just outside the penalty area and it was headed into the right corner of the net, but Green again made a save.

Swansea’s attack grew more threatening in the second half, but it was tough for them to find the back of the net past the veteran keeper. Striker Wilfried Bony lobbed a shot in the 48th but it went high. He had two more on-target efforts in the 67th and 68th that were both saved.

It was Ki who finally scored the opening goal. In the 78th, the midfielder received the ball at the left side of penalty box, confused the defender and fired a shot with his left foot. The ball hit the right post and bounced off into the net.

Swansea ended the game 2-0 with a goal from Routledge five minutes later.

QPR also had some critical chances, but they were blocked by defenders and goalie Lukasz Fabianski.

Ki came out on top on Wednesday, but both Koreans seem to have secured their positions on the starting rosters. Ki has started all 14 matches this season and Wednesday’s game was Yoon’s seventh consecutive start.

“We did great in the first half, but failed to score any goals,” Ki said after the match. “Players were more focused in the second half and had two goals.”

The next match between the two teams is scheduled for Jan. 1.