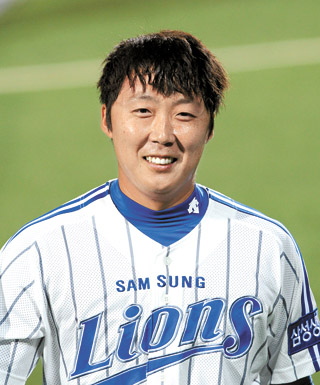 Despite strong opposition from fans, the Samsung Lions are parting ways with franchise pitcher Bae Young-soo, who spent his entire 15-year career with the team.
The Hanwha Eagles announced on Wednesday the signing of Bae for 2.15 billion won ($1.93 million) for three years, including a 500 million won signing bonus and 550 million won annual salary.
Bae had seven Korean Series wins during his time with the Lions.
Bae earned his nickname “Blue-blooded ace” when he pitched with an injured arm in the 2006 Korean Series under the effects of painkillers. He finally led the team to victory in the series, though he had to undergo surgery afterward and it took him more than a year to fully recover.
Bae has the most wins among active pitchers, going 124-98 in 398 appearances over 15 seasons with a 4.21 ERA.
He also led the Korea Baseball Organization (KBO) in wins with 17 in 2013. This year, however, he tailed off to 8-6 with a 5.45 ERA, which probably was a major factor in the Lions not re-signing him.
In the first week of the free-agent market, when teams are allowed to negotiate exclusively with their own free-agent players, Samsung signed only pitchers Yoon Sung-hwan and An Ji-man, and infielder Cho Dong-chan. Bae and another pitcher, Kwon Hyuk, were released to the second week of the market when their current team was excluded from negotiating with them.
Now, free agents are free to sign with any team through Jan. 15.
Hanhwa finished the 2013 season last in the standings and is in the process of rebuilding under the new manager, Kim Sung-keun.
Though the Daejeon-based team retained free agent Kim Kyeong-eon for three years and 850 million won, it still had to strengthen its unstable bullpen as none of its pitchers posted double-digit wins this season.
It was three hours before midnight Wednesday when Bae finally accepted Hanwha’s offer.
Hanwha also signed Kwon for 3.2 billion won for four years on Friday and Kia Tigers pitcher Song Eun-beom on Tuesday.
Bae is leaving his beloved team, but he seems to be more concerned about his fans, who raised money and took out a newspaper advertisement to keep him in Daegu.
“I feel sorry, especially for the fans,” said Bae. “I suddenly shed tears when I saw the ad in the newspaper. I won’t forget [the fans] for the rest of my life.”
This year’s free-agent market has been bigger than ever. The total amount spent in 15 free-agent signings was more than 61 billion won, far larger than last year’s 52.35 billion. Choi Jeong of the SK Wyverns signed with his home team for a record 8.6 billion won for four years, which included a 4.2 billion won signing bonus.
There are four remaining free agents: outfielder Lee Seong-yeol, catcher Cha Il-mok and pitcher Lee Jae-yeong of the Nexen Heroes, and SK Wyverns infielder Na Ju-hwan.