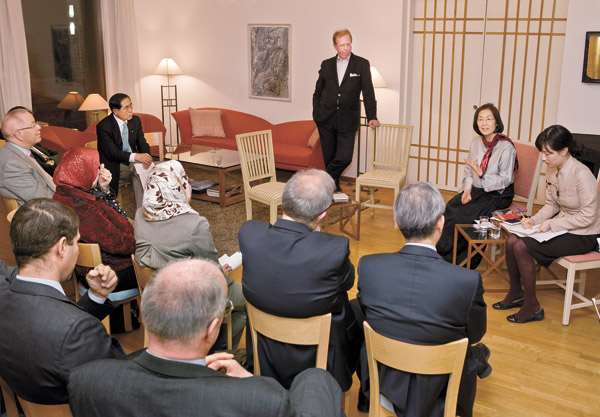 About 30 foreigners, mostly diplomats and translators of Korean literature, gather on Nov. 27 at the home of the Swedish ambassador to Seoul to meet Korean novelist Ch’oe Yun and listen to her philosophy on literature. By Park Sang-moon

In a dark uphill ally on Sungbukdong-gil in Sungbuk District, northern Seoul, a quiet house could be seen in the distance. Upon arrival at the top of the hill, a light came on in the residence and about 30 people were welcomed inside for the 36th Seoul Literary Society meeting.

The gathering on Nov. 27, organized at the home of Lars Danielsson, the Swedish ambassador to Seoul, aimed to provide a better explanation of Korean literature to foreign diplomats in Korea.

“Korean literature has such a deep tradition of good writers who write on very different subjects,” Danielsson said. “So for foreigners living in the country for a short time, it’s a very good way to get a wide range of opinions and ideas about what is important to Korean society.”

Korean novelist Ch’oe Yun recited the first few excerpts of her short novel “The Last of Hanako” (1994) and the English translator’s recitation followed. Ch’oe acknowledged her interest in women’s issues in Korean society, a topic reflected in her story.

“As a woman, I have a question,” said Sukruye Bayar Balcius, a counsellor at the Turkish Embassy in Seoul who was in the audience. “How do you see women in Korean society right now as compared to the 1970s?”

“Over the past 40 years, there have been dramatic changes,” Ch’oe said. “While women mainly worked in the labor sectors in the 1970s, now they play important roles in diverse areas in Korean society.”

Women’s rights in Korea were recognized much later compared to other developed countries, but women’s status has improved quickly - and faster than in many other countries, she said.

Jerome Pasquier, the French ambassador to Korea, recalled that the first Korean novel he ever read was written by Lee Moon-youl - the first Korean book that was translated in French about 20 years ago, he said.

“For us diplomats, I think if you only read official reports, you will know all the statistics and so on,” Pasquier said, “but you will not understand how people think. And you learn this much more from literature than from official reports.”

Danielsson said he especially likes Korean short novels, which deliver powerful messages in a condensed form. “To me, literature is both a pleasure and a good professional tool to understand this country better,” he said.
BY PARK YUNA ypc3c@joongang.co.kr