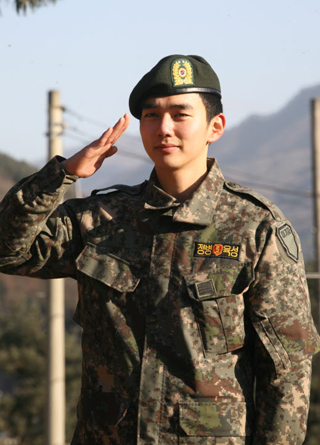 The mercury dropped below zero early Thursday morning, but hundreds of fans from as far as China, Japan and Hong Kong gathered in front of the military base in Hwacheon, Gangwon, to greet Yoo.

The 21-year-old actor saluted his fans and said, “Thank you.” He then burst into tears.

“I’ve learned a lot of things over the past 21 months. I hope I can make people happy with my acting,” he said.

When reporters asked what he missed the most while he was serving in the military, he said, “I miss my cat and I want to eat home-cooked meals.”

He also shared what his next project will be: a period film called “Magician in Joseon.”

After taking a few weeks of rest, Yoo will resume his career activities by meeting his fans in Korea on Dec. 21 and will then fly to Tokyo to meet his fans there for two days.

Having started out as a child actor at age 7 in 2000, Yoo has been building up his career by acting in many hit TV dramas and films. The last drama series he starred in before he enlisted was “Missing You.”