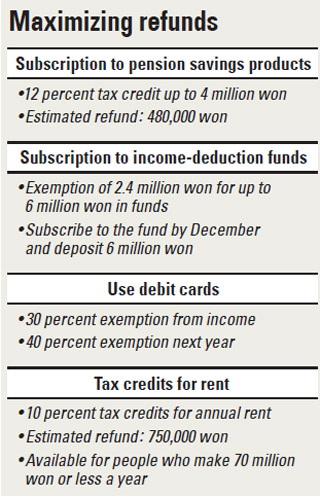 For ordinary salaried workers, a year-end tax settlement is like a bonus. It is even called “the 13th-month wage.” Many grope around to find receipts in order to estimate how much they will get back as a tax refund.

This year, there are a handful of clever ways to get more.

Since the revised income tax law will be applied to this year’s tax settlement, taxpayers need to watch carefully what has changed. Last year, the government stuck to its principle of not raising tax rates, but it turns out people in high- and middle-income brackets will pay more income taxes starting next year after tax credits are slashed.

The government decided to reduce credits in order to maintain current tax rates, while at the same time expanding tax revenue to pay for President Park Geun-hye’s welfare promises.

To increase refunds, those who invested in financial products need to look at what type of deduction the products offer.

There are two types of tax-cutting tools: exemptions or deductions from income, and tax credits.

Those who hold pension savings products will be eligible for a 12 percent tax credit on up to 4 million won (about $3,600) of savings a year for a maximum refund of 480,000 won.

One thing to note is that those holding pension funds must keep their accounts for 10 years in order to qualify for the tax refund. If they cancel their accounts, an additional 16.5 percent income tax will be imposed. The income deduction fund is available only for people with annual incomes of 50 million won or less.

People who have been using both credit cards and debit cards for the past 11 months should use debit cards more this month to boost their tax refunds. Debit card payments offer deductions on up to 30 percent of spending, compared to 15 percent for credit cards.

In addition, the government pledged to raise the deduction rate for debit cards to 40 percent for consumers who double their debit card spending compared to last year. The debit card deduction includes payments at traditional markets and public transportation fees for up to 1 million won each. The total deduction limit is 5 million won.

Koreans living on monthly rental contracts can get refunds from what they paid in rent. For up to 7.5 million won, 10 percent will be refunded from the total tax payment this year. The maximum amount a tenant can get is 750,000 won. Those who are eligible for the rent tax refund must have an annual income of 70 million won.

Due to the income tax revision, high earners will receive less in refunds. Although the overall income tax rates have not changed, those who earn more than 50 million won to 300 million won will be subject to a higher rate of 38 percent, up from 35 percent, because the total amount of income deduction benefits has been reduced for people in that income bracket.

Spending on medical services, education, and charitable and political contributions will receive 15 percent tax credits. They were all excluded from taxation last year.