Cavs get a boost from the bench to beat Bucks

Cavs get a boost from the bench to beat Bucks 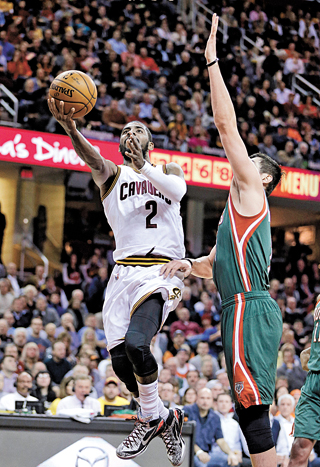 Kyrie Irving of the Cavaliers drives to the basket against the Bucks’ Ersan Ilyasova, from Turkey, in the second quarter of a game on Tuesday, local time, in Cleveland. [AP/NEWSIS]


As Mike Miller slung his backpack over his shoulder and headed toward the locker room door wearing a “God Loves Cleveland” T-shirt, a voice from the far corner stopped the Cavaliers’ veteran swingman.

Miller didn’t have to turn around to know who it was.

Miller came off the bench and provided Cleveland with a much-needed spark in the second half Tuesday night, helping the Cavaliers to their fourth straight win, 111-108, over the young-and-hungry Milwaukee Bucks.

Kyrie Irving scored 28 points, Kevin Love had 27 and James finished with 26 points and 10 assists for the Cavs, who have quickly turned things around following a four-game losing streak. The big three combined for 81 points, but it was Miller, a 15-year veteran best known for his 3-point shooting, who made several big plays in the second half to help put away the Bucks.

Miller didn’t play in Cleveland’s previous three wins, but when Coach David Blatt turned to him in the third quarter, the 34-year-old responded.

“We were in trouble and we had to do something,” Blatt said. “Mike answered the call.”

Miller made two 3-pointers, grabbed seven rebounds and made a crucial block in 18 minutes - all in the second half.

“He sort of stabilized us, gave the others confidence and that’s what a veteran should do,” Blatt said. “I gotta give him a lot of credit. He hasn’t played in the last several games and we threw him into a very tough situation and he answered the call in a big way.”

“I’ve played with him for so long that I know exactly how he can be effective,” James said. “He’s going to be very important to our team.”

Brandon Knight scored 24 and 19-year-old rookie Jabari Parker, the No. 2 overall pick in this year’s draft, had 22 points for Milwaukee.

Parker also made the game’s most sensational play, beating Anderson Varejao with a crossover dribble and delivering a vicious, left-handed dunk. Parker finished one point shy of his season high, but he wasn’t concerned about anything other than the loss.

“It doesn’t matter,” Parker said. “If we lose it’s out the window. That’s all I care about. I don’t care about stats. You’ve got to get the win. That’s all that counts.”

The Cavs trailed 89-86 when Love hit a tying 3-pointer with 4:44 left. Milwaukee pushed the ball up the floor and 6-foot-11 Giannis Antetokounmpo seemed to have a mismatch on a drive, but he had his baseline shot blocked by the 6-foot-8 Miller, who has creaky knees and not the vertical jump he once had.

“It’s what I do,” he deadpanned, drawing laughter from reporters. “I made my career on that.” AP