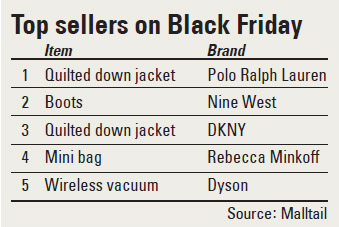 The most popular item among Korean shoppers on the weekend of Black Friday was quilted down jackets from Ralph Lauren’s Polo line, according to data from Malltail Thursday, one of Korea’s largest shipping companies that handles direct shipments from overseas e-commerce sites.

Malltail tracked customers who placed orders through the website from Nov. 28 through Dec. 1.

The second most purchased item was boots from Nine West, followed by a down jacket from DKNY. The fourth and fifth most popular - a Rebecca Minkoff mini bag and Dyson vacuum cleaners - were both on sale at online U.S. e-commerce behemoth Amazon.

The delivery company said it expects transactions to continue to increase ahead of Christmas.

“As the Christmas season draws near, other deals will likely attract Korean shoppers,” said Kim Ki-rok, head of Malltail.

Items costing less than $200 are popular because they are exempt from customs taxes.

The growing number of Koreans buying goods on foreign websites during the holiday season shows that people will shop beyond their geographic boundaries in search of a good bargain.

The total value of direct purchases made on foreign websites jumped from $707.2 million in 2012 to $1.1 billion last year, according to the Korea Consumer Agency. The figure is expected to surpass $2 billion this year.