Excavator simulator not a game

Excavator simulator not a game 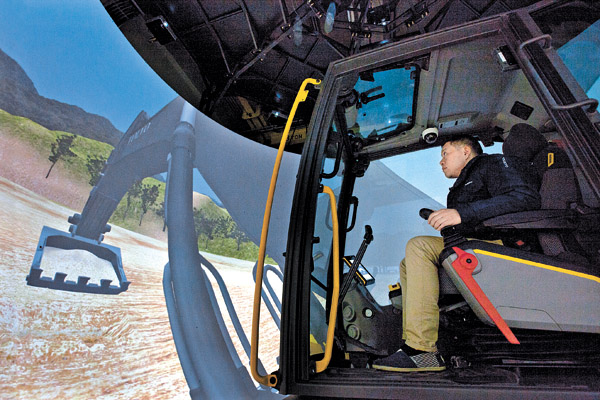 An engineer operates an excavator using the real-time virtual simulator at the headquarters of Volvo Construction Equipment Korea in Changwon, South Gyeongsang, on Nov. 28. By Park Sang-moon

The machine, based on a 48-ton excavator, looked strange at first glance during a Nov. 28 visit to Volvo’s Virtual Product Development Center in Changwon, South Gyeongsang. The excavator didn’t have a bucket attached to it and was set in a small room surrounded by concrete walls. But the strange feeling disappeared when its switch was turned on and an image of a field with grass, soil and rocks was brought up on a seven-meter-wide (23-foot-wide) video screen.

By moving a controller set on the excavator’s right side from side to side, the image of the excavator’s bucket responds quickly, stretching its arm up, then hitting the ground to dig. It doesn’t take long to feel that this system is so much cooler than a video game because vibrations, pressure and sound are delivered to the operator in real time. The simulator allows testing of many different types of excavators by simply inputting the desired model’s features, including size and powertrain.

“This is a program that allows engineers to run pre-tests before the company develops actual excavators,” said Kang Ho-jin, Hybrid/Electro-Hydraulics chief project manager. “Since excavators are much more complicated machines than people think, so many errors are made when we develop a new model, but this simulation system eliminates so many errors in advance, saving us time and reducing development costs. This is our next-generation technology that will improve Volvo’s competitiveness in the construction equipment market.”

VMS was born in February at Volvo’s Virtual Product Development Center, the facility built in 2006 at a cost of 14 billion won ($12.54 million) with the intention to develop technology that can upgrade excavators, one of Volvo’s major products along with wheel loaders, graders and rollers. About 20 of the 300 engineers and researchers at the center worked for three years developing the country’s first virtual simulator for excavators. The company said it will invest an additional 4 billion won in the development center through 2016.

Most excavator manufacturers make prototypes to run tests when they develop new excavators. They then run tests on an actual working field to see whether the new excavator operates properly. But such a process requires a lot of time and money. Making some holes on small parts like a control rod, for instance, sometimes takes months to produce and test.

With the VMS simulator, the whole process is seen on the screen in real time through 24 projectors. For instance, whenever the bucket digs in the ground or scoops up dirt, 33 computers outside the simulation room measure the excavator’s hydraulic power and covert the data into mathematical figures. Engineers then reflect the collected data to correct errors and make adjustments on the features for a developing model.

The company expects the simulator will produce more accurate designs, reduce the time required for development, and ultimately allow for it to sell its products for less than its competitors.

“The biggest issue for manufacturers like us is whether a driver can actually operate a newly developed excavator on a real working field,” said Lee Jae-yong, chief engineer of the virtual machine simulator.

“Making a machine move isn’t a big deal if we just make a new car that moves and stops by stepping on the gas and brake pedal, but developing an excavator is a totally different story,” Lee says. “It is hard to predict whether a newly developed machine will operate without any problems no matter who the driver is and where a working field is, because we can’t predict until we test an actual machine on an actual field. But by using this simulator, all we need to do is adjust data for each model saved in computers until we find no errors. We can finish this within a minute.”

The company said it is testing three models by using the simulator and expects to introduce them in the market next year.

After acquiring the construction equipment business from Samsung Heavy Industries in 1998, the company had 370 billion won in revenue that year and kept growing to 1.6 trillion won in 2007.

The company, however, was hit hard by the global financial crisis. From 2008-09, its revenue fell by about 600 billion won and production volume was cut in half. The company overcame the crisis in 2010 to record 1.7 trillion won in revenue and hit its all-time high of 2.3 trillion won the next year. In 2013, however, revenue decreased by about 500 billion won.

“We thought technology is the key to running the business stably and strengthening competitiveness in the future,” said Hong Myung-sun, the company’s director of advanced engineering. “We will keep working on developing such techniques.”