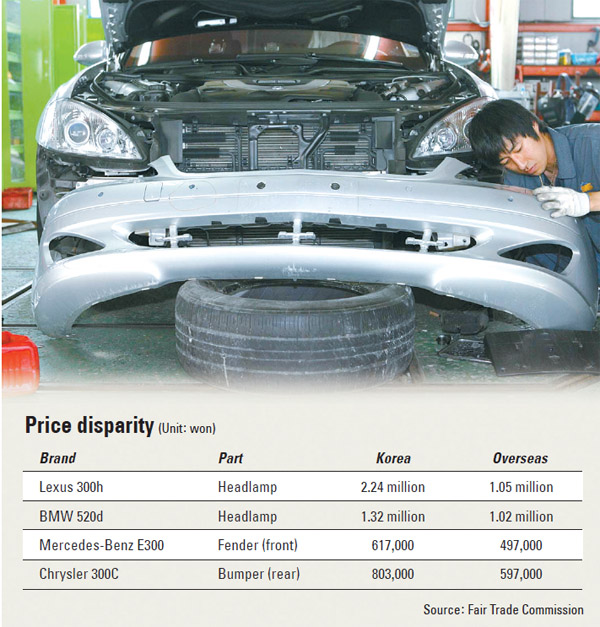 Kim Kyung-hwan brought his SUV from the United States to Korea a few years ago, and he felt it cost much more than it did in the United States every time it needed repairs. When he complained about the cost, mechanics at the repair shop said, “Imported parts are just expensive.”

“I always feel like I’m overpaying, because I wasn’t able to know the real price,” he said.

It wasn’t only Kim’s problem. Because the government received tons of complaints regarding costly auto parts for imported vehicles, automakers are now required by the Ministry of Land, Infrastructure and Transport to post prices on the Internet. The Fair Trade Commission (FTC) then studied the prices for 30 parts for the first time since the regulation was implemented in August in cooperation with Consumers Korea and announced the results Thursday: The average price for 23 of 30 parts being sold are about twice as much in Korea as overseas.

“The reason the headlamp is expensive is because it includes high-end technology,” said Kim Sung-hwan, a spokesman for Toyota Korea. “Compared with other German automakers, the rest of the parts aren’t that expensive. We also think it isn’t right to directly compare the price in the United States, where a total of 270,000 units, or 50 percent, of Lexus’ total production was sold last year.”

“Audi doesn’t set the price by comparing it with other automakers’ prices,” said Jung Yoo-jin, a spokesman for Audi Korea. “The mother company in Germany and each branch in each nation set the price after studying each market.”

Jung said most complaints Audi received from consumers were for not providing a Korean-language service for the auto parts search web page and that problem has been resolved.

The FTC’s report also included the parts price difference between domestic and import vehicles with engines larger than 2,000cc. It said the selling price of the BMW 520d was about 2.9 times more than Hyundai Motor’s LF Sonata, Kia Motors’ K5, Chevrolet’s Malibu and Renault Samsung’s SM5 sedans. But its parts were 4.6 times more expensive than domestic brands. The 1.32 million won price of a headlamp for the BMW 520d was seven times higher than the average price for domestic brands.

“The headlamp for the vehicle [520d] uses xenon light, while many domestic brands use halogen light,” said Jung Jae-yoon, a manager of BMW Korea. “It isn’t fair to compare the price uniformly without considering such features. Consumers also need to know that many of the domestic brands the FTC studied are gasoline models. The 520d model is a [more expensive] diesel model.”

In a survey the FTC conducted on the fairness of auto parts prices in Korea, 47 of 100 respondents said they don’t really trust the information provided and no one fully trusted it.

Despite such complaints, most foreign automakers continued to ride high in November.

BMW recaptured its No.1 position in the country to end Mercedes-Benz’s two-month stay at the top by selling 3,481 cars, the Korea Automobile Importers and Distributors Association (Kaida) said on Thursday.

Kaida added that a total of 16,959 imported cars were newly registered in November, a 3.2 percent increase from October and 22.4 percent from the same month a year ago.