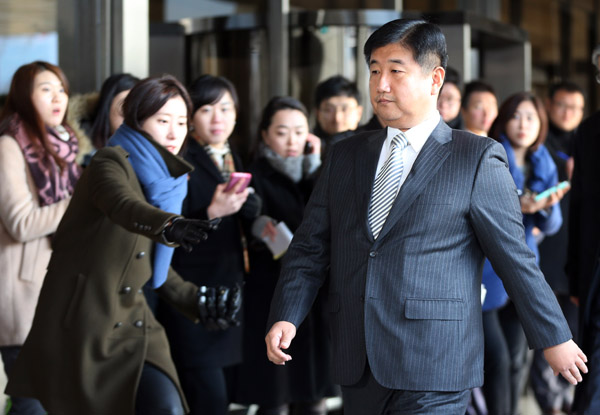 Park Gwan-cheon, a policeman seconded to the Presidential Civil Affairs Office, appeared at the Seoul Central District Prosecutors’ Office Thursday morning to be questioned on the allegation that he leaked a confidential Blue House report about behind-the-scenes string-pulling by Chung Yoon-hoi, the shadowy former chief of staff to President Park Geun-hye.

Park entered the prosecutors’ office in southern Seoul at 9:30 a.m. and had yet to emerge as of press time. On the way in, he told a mob of reporters that he would sincerely cooperate with the investigation.

He admitted to authoring the report dated Jan. 6 at the order of his then-boss Cho Eung-cheon, the former secretary for civil service discipline.

But he denied leaking the report , which has become a major scandal for the Park government.

The internal report was written by the Office of the Presidential Secretary for Civil Service Discipline, a kind of internal affairs office for the Blue House that investigates corruption and irregularities throughout the government. The report was the result of an investigation into Chung and his relationship with Blue House secretaries.

Prosecutors said Thursday they were deliberating whether to request an arrest warrant for Park, a senior officer at Nowon Police Station in northern Seoul, who finished his temporary duties in the presidential office in February, on a charge of illegally leaking the documents.

In its own investigation, the Civil Affairs Office of the Blue House concluded Tuesday that Park printed out about 100 different documents before he left the Blue House in February and connived with two junior police officers at the Seoul Metropolitan Police Agency to leak them. The two junior officers were questioned Wednesday.

The presidential office’s theory is that the documents were given to reporters from the Segye Ilbo, which ran a story last Friday that quoted the leaked document titled “Current activity of the VIP’s confidante and rumors about the replacement of the Blue House chief of staff.”

VIP was a code word for President Park; the confidante was Chung Yoon-hoi, the former son-in-law of Choi Tae-min, the late pastor who is known to have mentored Park when she was playing the role of the de facto first lady during the 1970s after her mother was assassinated. Chung worked as Park’s chief of staff from 1998 till 2004. But little is known about his activities since. He has no official position in the government.

The report said Chung led a group of 10 close aides to the president - including three presidential secretaries - who had regular meetings to discuss state affairs and how their influence should be used.

On Thursday, prosecutors raided a couple of restaurants in the posh area of southern Seoul patronized by Chung and his group, according to the report. They confiscated reservation and payment records. Chung and the Blue House senior secretaries have claimed they didn’t even know the restaurants.

Prosecutors also subpoenaed Cho Eung-cheon, the former secretary for civil service discipline under the Civil Affairs Office at the Blue House, as well as some other Blue House officials who filed defamation suits against the Segye Ilbo. They are expected to appear before prosecutors on Friday for questioning.

Cho is also suspected of leaking the Blue House report. Cho told a few media outlets that about 60 percent of what the internal report said was correct and that he was forced to quit his Blue House job on April 15 in possible retaliation for his refusal to accept phone calls from Chung.

The former prosecutor and lawyer has personal ties with Park Ji-man, President Park’s younger brother, which date back to 1994, when the brother was arrested for taking drugs and Cho was a prosecutor in charge of the case.

That led to speculation that the scandal originates in a behind-the-scenes power battle between the president’s brother and Chung. Chung initially claimed he severed all contact with people working with the president since 2007, but he reversed that claim after Cho told a local daily on Wednesday that Chung maintained contact until April with Lee Jae-man, one of the three presidential secretaries mentioned in the leaked report as having regular gatherings with Chung.

In 2007, Chung quit his post as Park’s chief of staff for the Grand National Party presidential nomination, and disappeared from public view.

The president’s brother, chairman of EG Group, continued a hide-and-seek game with the press at his home and office.