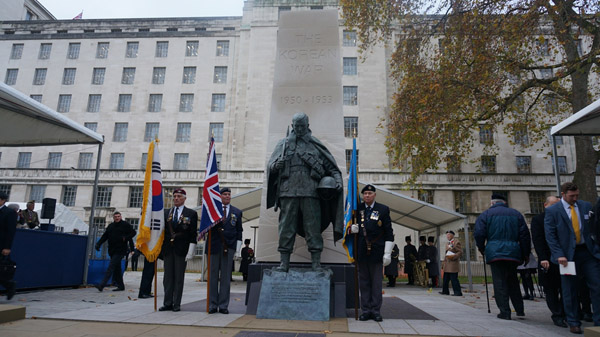 The first monument in London commemorating the sacrifices made by British soldiers who fought in the 1950-53 Korean War was unveiled in a ceremony on Wednesday in the Victoria Embankment Gardens. Provided by the Ministry of Foreign Affairs


The first public memorial in London to British soldiers who fought in the 1950-53 Korean War was unveiled in a ceremony Wednesday along the banks of the River Thames.

The memorial incorporates a bronze statue of a British soldier by award-winning Scottish sculptor Philip Jackson that stands in front of an inscribed Portland stone obelisk on a base of Welsh slate.

The 5.8 by 3.1 meter (19 by 10 feet) memorial is just outside the headquarters of the U.K. Ministry of Defence. It is the last such monument to be erected in the capital of one of the 16 countries that allied with South Korea during the war. Over 300 members of the British Korean Veterans Association (BKVA) attended the unveiling ceremony in Victoria Embankment Gardens in central London.

The ceremony was also attended by 200 British and Korean officials, including the Duke of Gloucester and Korean Foreign Minister Yun Byung-se. The memorial is a gift from the Korean government to express thanks to the 81,000 British soldiers who served in the Korean War, which includes 1,106 troops killed and 1,060 who were prisoners of war.

Queen Elizabeth II sent a congratulatory message that was read by the Duke of Gloucester. “The memorial is a fitting tribute to the veterans of that fierce conflict,” she said in the message, “and will ensure that they, and their fallen comrades, are never forgotten.”

“The Korean War was the first UN action against aggression,” reads an inscription on the obelisk. “Although exhausted and impoverished after the Second World War, Britain responded immediately by providing strong naval, army and air forces and became the second largest contributor after the United States. A distant obligation honorably discharged.”

Previously, a Korean War memorial plaque in the crypt of London’s St. Paul’s Cathedral served as a memorial for British soldiers who died during the Korean War, and the British war veterans requested a bigger memorial.

In November 2013, President Park Geun-hye attended a groundbreaking ceremony during an official visit to the United Kingdom ahead of the erection of the monument.

Michael Fallon, the British defense secretary, said at the ceremony, “We must never allow the notion of a ‘forgotten war’ to take hold. Where Britain’s armed forces put their lives on the line for their country, this must be commemorated, and in the right way. The Korean War was the first ever UN action against aggression, and so has enormous international significance.”

Minister Yun at the London think tank Chatham House, also known as the Royal Institute of International Affairs, said that modern cooperation between the two countries was “made possible by blood-forged collaboration during the Korean War, which will be symbolized by the new Korean War memorial.”

London’s memorial comes nearly 20 years after one was set up in Washington D.C. in 1995. That was the 15th such monument.