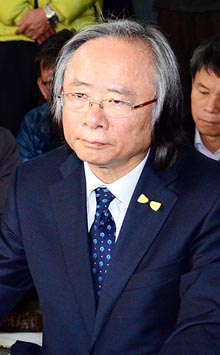 Oceans Minister Lee Ju-young meets with the families of the missing and dead crewmen from Oryong 501 on Thursday. By Song Bong-geun


The Korean government said on Thursday that it will deploy a 5,000-ton patrol ship and two P-3 maritime patrol planes to help with search efforts for the dozens missing following the sinking of the Oryong 501 fishing trawler in the Bering Sea.

The announcement comes as eight more bodies were recovered Thursday by patrol ships searching the eastern coast of Russia.

Thirty-three crewmen from Indonesia, the Philippines and Korea still remain unaccounted for since the sinking on Monday of the 1,753-ton deep-sea fishing vessel, which capsized off the easternmost coast of Russia amid poor weather conditions.

That brings that death toll up to 20. So far there are only seven known survivors: three Indonesians, three Filipinos and one Russian.

Two of the eight bodies found Thursday were confirmed to be Koreans.

Of the 11 Korean crew members aboard the ship, who ranged in age from their early 20s to their late 50s, six have now been identified and confirmed dead.

The deployment of the additional patrol boat and planes by the Korean government was decided upon in a meeting held to discuss protections for Koreans overseas, which was attended by officials from the Ministries of Foreign Affairs, Oceans and Fisheries and National Defense.

Officials said that the fairest weather since the sinking of the Oryong warranted conditions most conducive to rescue efforts.

The families of the missing and dead crewmen have criticized the boat’s operator, Sajo Industries, for not doing enough to save their loved ones and operating a boat so old. The Oryong 501 was 36 years old.

One of the final messages from the 46-year-old captain of the ill-fated Oryong, Kim Kye-hwan, which was unveiled Thursday, provided a clearer picture of how the boat capsized.

“The boat has begun to tilt because the seawater is not draining properly because it is blocked by the fish,” he told fellow Captain Kim Man-seob of Carolina 77, one of the vessels nearby, at around 12:20 p.m. local time in a radio transmission.

The vessel had filled with too much seawater after hauling in a large catch earlier that day.

The Oryong captain added that the boat’s engine had been turned off so that the crew could focus on draining “since it was impossible to steer because of the leaked seawater.”

About an hour later, Oryong Captain Kim informed Lee Yang-woo, another Sajo Industries captain and a close friend, via radio that the boat was filling up with water again. “I tried to turn the boat, but it began to tilt, so I am trying to steer it again.”

Around 4 p.m., he told Carolina 77 that the boat was tilting more sharply. “We will have to abandon the ship soon so please prepare for rescue.”

At this point, Kim also radioed to Captain Lee, “I think I have to give you my parting words.”

“Don’t say that,” Lee urged Kim. “Calmly evacuate the crewmen. You have to come out, quickly.”

Kim then told Lee that all the lights had gone off.

“I am staying with the boat till the very end,” he said.