Warm up this winter at Busan’s hot springs

Warm up this winter at Busan’s hot springs 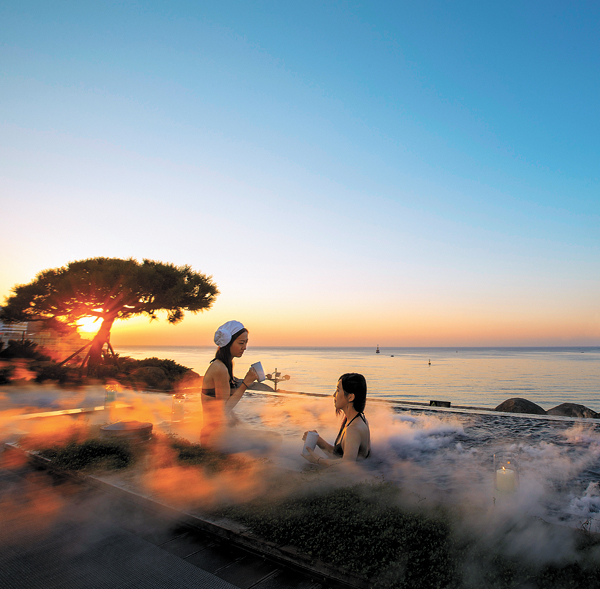 Of the many hot springs in Busan, Cimer Spa at Busan Paradise Hotel is one of the most high-end spa facilities as it overlooks Haeundae Beach. By Ahn Sung-sik

Winter is a discouraging season for ardent travelers. But if a trip involves bathing in toasty mineral water at an open spa with a snow-capped view, it becomes a different story.

The nearest spa destination to Seoul - and probably the best - is Cheonan, which is about a two-hour drive from the center of the capital city. But if you’ve been there, done that and are looking for something different, the JoongAng Ilbo recommends Busan instead.

The southern port city has long been known for its milder weather, beautiful beaches, abundant seafood and film festival, but it has never been spotlighted as a spa city.

Yet Busan deserves this label as it has the highest number of hot springs across Korea’s seven metropolitan cities, including Seoul.

According to the Ministry of Government Administration and Home Affairs, 449 spas were registered across the nation as of January this year. Busan is home to 35 of these, while Incheon has the second-largest number at 15.

The history of Busan’s hot springs dates back to 1876. When the port opened, the Japanese were the first to flock to the city to develop its spa facilities. When the Korea-Japan annexation treaty came into effect in 1910, more modern public bathhouses and inns with spa facilities opened one after another near the Dongnae District and Haeundae Beach area. The Japanese also installed streetcars from Busanjin to Dongnae for easier transportation to hot springs.

Busan natives have their own memories of these spas.

“One of the annual rituals for my family was going to Haeundae to soak in hot spring water before national holidays,” said Choi Byung-soon, who ushered reporters from the JoongAng Ilbo around hot spring spas in Haeundae.

Spas in Busan are scattered in all kinds of imaginable settings. There is a hot spring located in Dalmajigogae, where dozens of cafes are densely located, and another nestled inside a sleek 80-story skyscraper.

If you want to beat the winter chill with hot water, here’s a guide to Busan’s spas.


An open-air foot spa at Dongnae

In Busan, Dongnae is synonymous with spas as it is home to 23 bathhouses or inns with hot spring facilities.

According to numerous ancient documents, the kings and aristocrats of the Silla era (57 B.C. - A.D. 935) visited spas in Dongnae. 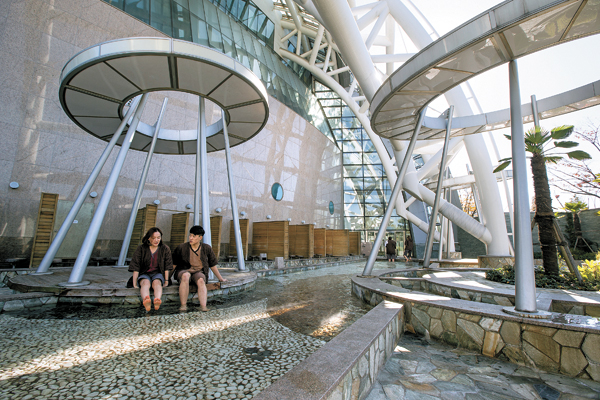 Until the 1970s, the area was one of the country’s most popular honeymoon destinations. But as time went by, spas in Dongnae saw a drop in visitors because of the advent of modern hot spring facilities in downtown Busan.

In order to attract more visitors, Dongnae District Office opened an open-air foot spa in 2005. During winter, about 25 tons of hot spring water is poured into the spa every day for anyone to enjoy for free.

The outdoor foot spa is open from 11 a.m. to 4 p.m. and closes on Wednesdays and Fridays.

Heosimcheong, which is run by Nongshim, the country’s No. 1 instant noodle maker, is one of the oldest spas in Dongnae.

The hot spring facility was originally called Dongnae Tourism Hotel, but its name changed when it was taken over by Nongshim in 1985.

The hotel was formerly a modern inn established by a rich Japanese man. Back then, it was considered rather large as it had 36 rooms.

After the acquisition, Nongshim opened a five-story spa next to the hotel in 1991. The spa opened decades ago but its facilities still remain clean. It is spacious enough to accommodate up to 3,000 people a day.

Spaland is located on the first and second floors of Centum City, the largest department store in the world as certified by the Guinness World Records. 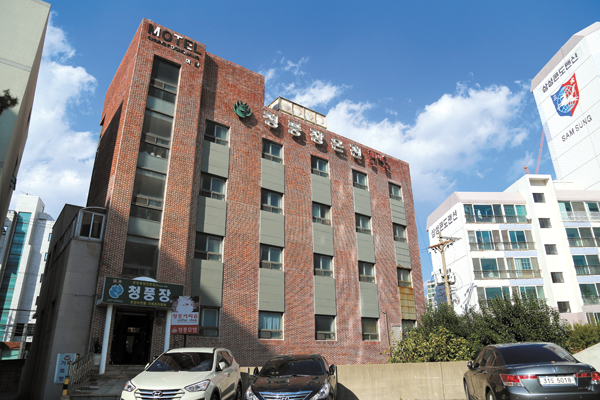 Cheongpungjang, an inn with spa facilities, has been in operation over the past 60 years in Haeundae-dong, where Haeundae Beach is located.

The initial plan was to create a water park and swimming pool inside the department store, but hot springs were discovered 300 meters (984 feet) below ground level when the building was under construction.

This gigantic state-of-art facility was even featured on CNN Travel as “a spa like no other.”

Many find that its popularity comes from its diverse facilities. For example, the Wave Dream Room enables people to relieve stress by watching waves of water while the SEV Room emits electrons that are good for one’s body.

Various jjimjilbang, or saunas, are another characteristic of Spaland.

The Salt Room is decorated with Himalayan sea salt while the red clay room is plastered with red clay from Icheon, Gyeonggi.

The spa is also well known for its child-free policy as it only accepts children aged over 8. The age limit was 13 when it first opened years ago but the spa lowered it due to multiple requests from parents.

The spa opens from 6 a.m. to midnight throughout the year. It costs 13,000 won for an adult and 10,000 won for an elementary, middle or high school student. Once a ticket is purchased, it is good for four hours. If you want to stay longer, you have to pay extra. Visit shinsegae.com or call (051) 745-2900 for details.

Haeundae is best known for its beach, but it is also packed with travelers during winter, mainly because of its spas.

Nineteen spas are in operation in Haeundae-dong, but Cimer Spa is considered the most high end in the neighborhood.

The luxury spa can be found inside Paradise Hotel. Twelve of its themed hot springs are located outside, enabling people to look at Haeundae Beach while soaking in hot water.

The themed spas change depending on the season, with various ingredients believed to be good for one’s skin, such as honey, sea salt, sake and coffee, being added to each bath.

Of all the open-air spas, the one closest to the seaside is the most sought-after.

At a poolside bar, bathers are able to order ice-cold beer or a glass of wine while in the hot water.

The spa opens from 8 a.m. to 10 p.m. throughout the year. It is only open to hotel guests and fitness club members.

On the way to Gwangalli Beach, you will pass a huge 22-story cylindrical building housing a sauna, swimming pool and a small water park across its fifth to ninth floors.

The hotel discovered natural hot springs while working on a renovation in 2004. It redesigned its interior to capitalize on the newly found mineral water.

Spa Marine is inside the Doosan We’ve the Zenith- the second tallest building in the country - a sleek 80-story apartment complex with stores on the ground floor. The building is 301 meters tall.

The skyscraper’s construction company found the hot springs in 2005 when it was working on the building.

Since the hot springs come from 1,000 meters below the ground, the water pressure is high enough to create a massage effect.

Children who are smaller than 140 centimeters (4-foot-7) are not allowed to enter the bathtub because of the water’s depth.

The Vesta jjimjilbang is more famous to tourists than locals as it has become a favorite spot for people in search of an inexpensive place to spend the night during the annual Busan International Film Festival.

The jjimjilbang offers a panoramic view of Haeundae Beach and Gwangan Bridge.

Visitors can see as far as Japan’s Tsushima Island on a clear day.

During summer, the open-air spas are all open to guests. Twenty tents are set up on the top floor of the building, which are available to rent for just 20,000 won.

When the country was under Japanese colonial rule, affluent people from the island nation monopolized the spa industry. But after Korea’s liberation from Japan’s reign in 1945, local companies also began joining the spa industry.

Cheongpungjang is a local inn that opened around this time.

The building itself has been there for 60 years, weathering the ups and downs of Haeundae District, which is one of the most developed areas in Busan.

It takes about five minutes to walk to the inn from Haeundae Beach.

The rooms are shabby and old, but the bathtubs are spacious enough to accommodate two adults at the same time.

Since the inn has its own hot springs underground, visitors can use mineral water in their room.

The water leaves skin so moist that there is no need to dab on lotion even after taking a shower.

Halemaetang was famous for the quality of its mineral water that was believed to be effective in healing skin trouble, diabetes and arthritis.

After the renovation in 2003, however, it is more likely to be visited by people who want to enjoy a spa experience.

But Park Mal-bul, the owner of the center, plans to open a special spa for those who have the aforementioned health concerns next year.