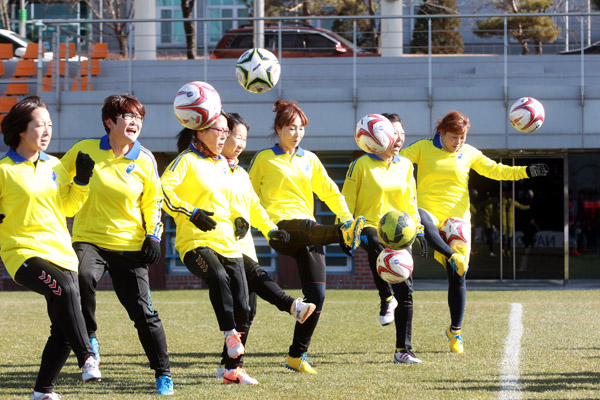 At the Yongin Football Club in Yongin, Gyeonggi, players on Real Yangji, a football team formed by Korean housewives, train even in subfreezing weather. They founded the team on Nov. 30 after winning the 2014 Yongin Jummarella Soccer Festival. Provided by Yongin City

Even as temperatures dropped below freezing, nearly a dozen or so Korean housewives, dressed in yellow uniforms, continued to practice at the Yongin Football Club in Yongin, Gyeonggi.

“This way, forward!” called another.

The ladies are all players on Yongin’s female football squad, but it was only last month that they were just ordinary, middle-aged housewives.

Their relationship with football began in October, when the Yongin City Government held the 2014 Yongin Jummarella Soccer Festival. Jummarella is a portmanteau of the words ajumma (which means “mid-age woman” in Korean) and “Cinderella.”

The housewives who participated in the festival, representing 31 districts and towns in Yongin, instantly fell in love with the sport.

Most of them had never even kicked a ball before, but with the spirit of an ajumma, they dominated the opposing teams over five matches.

Later, boosted by their win in the tournament, they decided to form their own team on Nov. 30, which they named Real Yangji.

With the exception of two, all of the players are housewives with children. The youngest, an unmarried player named Yoon Bit-nara, 25, said she had never touched a football until the event.

“I just participated because a few people asked me to try it. But playing football felt so refreshing. I can understand why men play,” Yoon said.

“These days, I like [Argentine footballer Lionel] Messi better than handsome actors in dramas like Hyun Bin or Jang Dong-gun,” piped in Choi Soo-kyung, 46, one of Yoon’s teammates.

Choi also plays with her sisters, Choi Ok-kyung, 52, the goalkeeper, and Choi Mi-kyung, 43.

The female football team Idong Jummarella FC was also established in the same way, by female players from the town of Idong in Cheoin District, Yongin.

The housewives, many of whom were pushed by their peers to participate in the Jummarella Soccer Festival, have since transformed into true players, unafraid to be aggressive on the field.

“Most of our team players, including myself, are housewives who had never even kicked a ball,” said Chun Eun-kyeong, 43, the striker for Real Yangji. “As we learned the roles of each position, we also learned how playing on a team could be so much fun.”

In Yongin, there are more such women who have found their talent and are establishing soccer squads. Most of them participated in the Jummarella Soccer Festival and are rushing to establish their own football teams. Two more teams are planning to be established this month.

The Yongin City Government also plans to expand its support, as it believes the soccer teams can build harmony among residents.

“I expect that the Jummarella soccer teams will contribute to creating a city where women can thrive,” said the mayor of Yongin, Chung Chan-min.