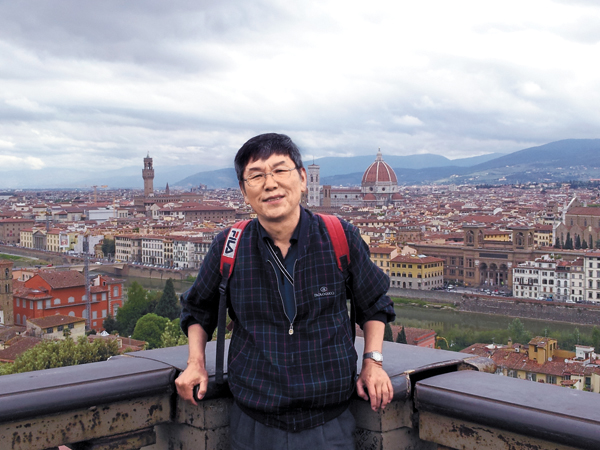 Lee Ki-seong visited Florence, Italy, in April. The spire of Palazzo Vecchio and the dome of Florence Cathedral are seen in the background. Provided by Lee Ki-seong

As soon as Lee Ki-seong graduated from college in 1979, he started to work. And from then on, he never took a break.

That life continued until he retired eight years ago, although he wanted to continue working.

So when Lee retired, he thought about how he wanted to live.

“If you leave a company, you might be lost, instead of feeling free,” he said.

Lee had spent the first third of his life studying to enter a good college and the second third devoting himself to society. Those years, he thought, were identical to what others had lived.

He made the determination to live the last years of his life doing something that made his heart truly happy.

Traveling and history were what came to mind first. In fact, Lee enjoyed history so much that in school he agonized whether to choose a major in history or business.

The book, which roughly translates to “A Walk Into the Balkan Peninsula: A History,” was published in October and is the result of his experiences across various countries in the Balkans.

When a JoongAng Ilbo reporter met Lee in his writing room in Jongno District, central Seoul, Lee took out his notes, which covered nearly every minute detail of his 50-day trip from Istanbul, Turkey, to Prague in the Czech Republic.

Yet although Lee never studied history in a professional capacity, he is proud of his accomplishments, in which he examined the problems apparent in Korean society throughout his visits to other nations.

“Public opinion is divided in Korean society,” Lee said. “I thought if my books present how other countries have solved social problems, it could be helpful to our society.”

That was why he chose to write about Spain, a place where Catholicism and Islam intersect, and the Balkan Peninsula, where Orthodoxy and Islam meet, Lee said.

The next book he plans to write will discuss the Frankish Empire, the territory ruled by the Germanic tribes during the Early Middle ages, he said. To write it, he has made subsequent trips to Europe - Germany this year and Italy last year. Next year, he plans to fly to France to collect information.

Yet although people work to save money during their working years, planning for life after retirement is never easy, he admitted.

“To plan for post-retirement, it’s important to figure out your area of interest in advance while you’re still working,” Lee said.