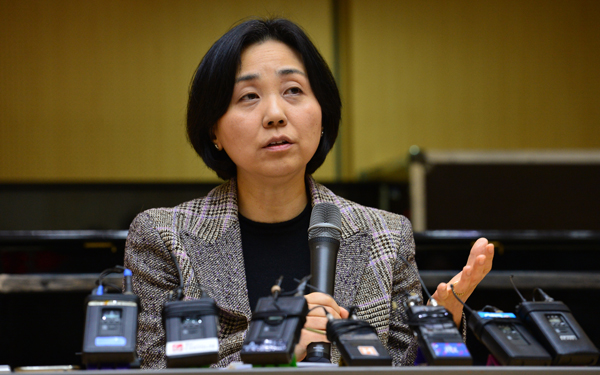 Park Hyun-jung, president of the Seoul Philharmonic Orchestra, speaks at a press conference on Friday at the orchestra’s studio inside the Sejong Center for the Performing Arts in central Seoul. [NEWSIS]

The current president of the Seoul Philharmonic Orchestra appeared in front of local media on Friday to address a statement released earlier this week by employees who claimed that she had violated their personal rights and abused her authority, tarnishing the reputation of the city’s prestigious ensemble.

In front of reporters, Park Hyun-jung admitted that she “may have used aggressive language toward her employees.”

However, rather than apologizing to her employees or acknowledging their concerns - which included accusations of sexual harassment and verbal abuse - the 52-year-old Park went a step further to attack Chung Myung-whun, the orchestra’s artistic director and principal conductor, who was appointed in 2009.

She may have used harsh language, she admitted, but only after witnessing Chung’s “inefficient management and overgrown bureaucracy.”

Park’s speech on Friday mostly disparaged Chung for what she called his “reckless behaviors” that went beyond her understanding.

“First, I would like to express my deepest apologies for disappointing many of the orchestra’s supporters and fans as well as Seoul citizens,” she said in her opening remarks, subsequently detailing what she had witnessed since her appointment last year that had caused her to “be somewhat aggressive toward her staff members.”

She added that it was difficult for her to “try and tackle the whole system head-on, which has been running like maestro Chung’s private organization [rather than] a proper public organization.”

“I was so shocked when I realized that the orchestra had been operating like some sort of club rather than a public organization,” she said. “I’ve been trying to reorganize this slothful and idle culture where there’s no line between public and private matters.

“That, of course, created conflict between me and other employees, who are so … comfortable with the current system.”

“The Seoul Philharmonic Orchestra runs on citizens’ tax money and I was shocked to see how that money had been spent,” Park continued, adding that she could not tolerate “Chung’s overgrown bureaucracy.”

“I now understand why my predecessor didn’t choose to extend his three-year term and why the post had been vacant for nearly a year,” she said.

Park went on to list the maestro’s alleged wrongdoings, including an instance when his secretary approached her to ask whether the orchestra would finance hotel charges while Chung’s house was being renovated, an inquiry that was reportedly made at the request of the maestro’s wife.

“I was shocked by the fact that his secretary, an employee of the orchestra, actually came to me to ask,” she said. “I found out that the orchestra once had paid for the hotel charges while their house was being renovated many years ago. He had to pay it back when it was revealed in the audit, but asking for it again really shocked me.”

She also took issue with Park’s prioritizing of his personal schedule over the Seoul Philharmonic Orchestra’s concert calendar, adding that such practices violated orchestra regulation.

Although she indirectly stated that she would retire following the emergence of a number of internal issues over the past few months, she said she would stay until the audit shed light on who was to blame, adding that she will take full responsibility for her part after the results were unveiled.

As of press time, Chung had not commented or issued a statement on Park’s address.