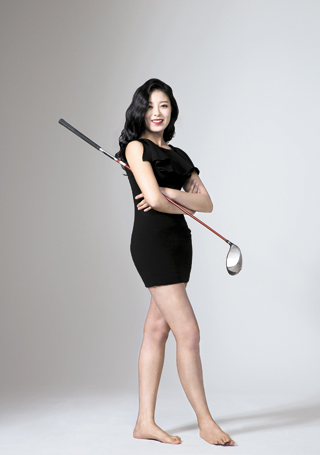 Professional golfer Hur Mi-jung was at the lowest point of her career on the LPGA Tour this summer, as she fell below 150th on the list of money winners.

Because only those who rank 125th or higher are seeded for the following year’s LPGA Tour, the 24-year-old golfer in her sixth year was on track to be sent back to the LPGA qualifying school.

And she was thinking she would retire from the game rather than go back to the school.

Hur won the LPGA Safeway Classic in 2009 in her rookie year, but soon hit a long slump as she tried to adjust her swing. She failed to return to form for years. It got so bad that she failed to make the cut in eight of the 10 tournaments this season.

“I joined the qualifying school for the first time when I moved to the United States in 2007, but I felt too burdened and ended up playing in the second-tier Futures Tour for a year,” said Hur when she sat down with the JoongAng Ilbo on Friday. It was the day she returned to Korea after the season. “Because I had a very hard time then, I thought I would quit golf if I was going to have to go to the qualifying school again.”

But Hur suddenly turned it around, finishing the Portland Classic in ninth place in August and qualifying to play in the season’s last major tournament, the Evian Championship in September.

There, she finished third, which cleared her to play in all of the tournaments remaining in this year’s tour.

At the Yokohama Tire Classic in September, Hur fired a final round 66 to finish four shots ahead of Stacy Lewis and win her first title in five years.

“It was a matter of confidence and I finally returned to my best after I joined the top 10 at the Portland Classic,” said Hur. “I found my swing and won a tournament. I would give this season a perfect score.”

She said her schedule is now flooded with interview requests.

“I need to go to Seoul from my home in Daejeon several times a week,” said Hur. “But I’m so happy when I think of the time no one was interested in me.”

At 5-foot-9, she is relatively tall for the LPGA Tour and is considered a born golfer with her long limbs. Her shoe size is 280 millimeters, a bit larger than a women’s U.S. size 12. But it seems she isn’t perfectly happy with her physical condition.

“I can hit farther off the tee, thanks to long arms and a large swing arc,” said Hur, “but it is difficult to find clothes and shoes that fit me. I sometimes had to wear men’s shoes.”

But that doesn’t seem to be a problem anymore, with golf equipment and clothing manufacturers contacting her to provide their products. And she is about to sign a contract with a sponsor.

After a monthlong break, she is going back to the United States at the end of the year to prepare for next season.

“What I learned from the long slump is that hard work is rewarded in the end,” she said. “My next goal is to win LPGA Player of the Year, just like Park In-bee.”