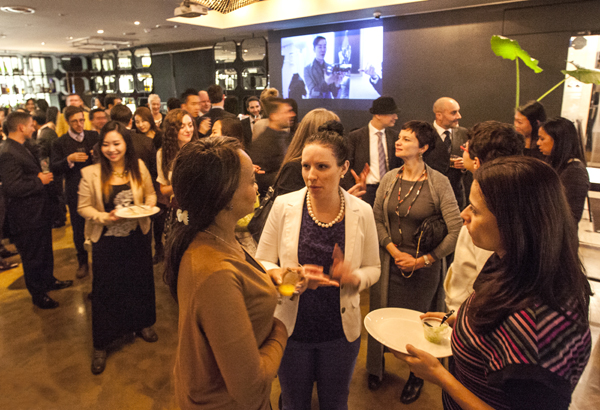 On a cold winter day, not long after the first snow fell in Seoul, more than 100 foreign diplomats came to an Italian restaurant in Itaewon, central Seoul, at 7 p.m. on a Wednesday to enjoy a Diplomatic Happy Hour.

The committee, which consists of six members working at foreign embassies in Seoul, hosts events four times every year, one event per season. The committee was launched in 2002 and welcomes anyone who would like to take part, Rutz said.

“The relatively new diplomats in Korea don’t know anyone and they don’t know where to go,” Rutz said. “So we reach out to those people and give them an opportunity to have fun in a friendly atmosphere meeting other people in the foreign community in Seoul.”

Camila Avina works for the cultural department of the Embassy of Mexico in Seoul. She has been to Diplomatic Happy Hours several times because she likes to meet new people in Seoul.

When Avina came to Korea almost three years ago, it was her first time living in Asia. It was tough at first because she didn’t speak any Korean, she recalled.

Some diplomats use the occasion to promote their governments’ agendas in Korea.

Marcelo Pazos is a director of the Commercial Office of Pro Ecuador in Korea, a state organization that promotes Ecuadorian exports and investments. “The main issue for Ecuador is to start negotiations for an FTA next year. That is the top priority for Ecuadorian diplomats in Korea,” Pazos said. “The [Korean] foreign ministry was very busy with China, Canada and Australia to finish [FTA] negotiations. Now it is time for us to start our own negotiation.”

He emphasized that Korean consumers will benefit from the FTA by cheaper fruits, cocoa and other foods.

When the Steering Committee of the Diplomatic Happy Hour was organized 12 years ago, it was only open to diplomats, and the first meeting drew 50 diplomats, said Francesco P. Cannito, who is the longest committee member and the first secretary at the Embassy of Italy.

“Our meeting is growing, and now the diplomats can bring their friends or business people,” he said. “It is our first time to have around 170 people.”