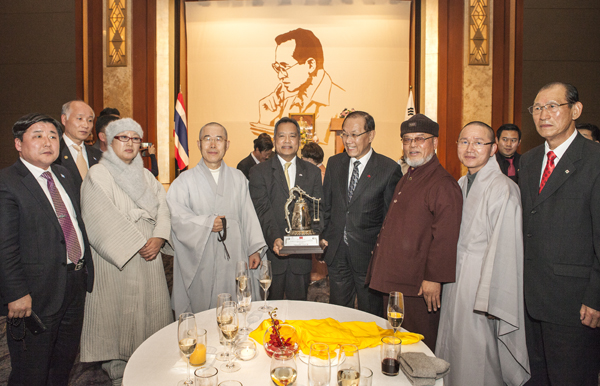 The 87th birthday of Bhumibol Adulyadej, the Thai King, was celebrated last week at Lotte Hotel, in central Seoul, by more than 400 people invited by the Embassy of Thailand.

The event was held in advance of the king’s actual birthday, which fell on Friday.

In a welcoming speech on Wednesday evening, Kulkumut Singhara Na Ayudhaya, the Thai ambassador to Korea, praised the king’s “profound accomplishments for bringing so much prosperity to the nation and people.”

“His majesty is the pillar of the country’s leadership and development,” said Singhara.

“He has visited all parts of the country, no matter how small, to listen to people,” and “helped Thailand become an elite exporter of top-quality agricultural products.”

Education Minister Hwang Woo-yea, who participated as an honorary guest, underscored the “strong ties” between Thailand and Korea.

“Thailand is a very special friend of ours. The country dispatched 15,708 soldiers during the Korean War, and that assistance helped us build the nation we live in today,” he said.

Hwang leads a friendship association between Korean and Thai lawmakers.

The speeches were followed by a burst of laughter and warm greetings in English, Korean and Thai - hello, annyeonghaseyo and sawadeeka - as the guests, many in their traditional attire or military uniforms, caught up with their international acquaintances.

Others scurried to the left or right of the ballroom to fill their plates with a wide range of Thai foodstuffs.

On a small name tag placed in front of each Thai dish were the original titles and English translations of the food, such as tao huay nom sod (soy milk pudding), panang mooh (panang curry with pork) and tub tim grob (water chestnuts in coconut milk).

Hanging on the side walls of the banquet hall were posters promoting Thai culture, with images of rice paddies, temples and night markets.

A large black-and-white sketch of King Bhumibol, flanked by the national flags of both Korea and Thailand, were displayed at the front.

Grutter also recalled his former days in Thailand, adding that the country “is very special for me because I’ve worked four years in Bangkok. I wish the food here was spicier like the ones I’ve enjoyed there.”

As the clock ticked toward the end of the ceremony and only some 50 Thais remained in the ballroom, everyone gathered in a circle with white candles in their hands for the finale. Songs in honor of the king soon filled the air.

Speaking in broken English, a Thai lady standing in the back provided translations with teary eyes: “It means: Long live the King. May his days be without number.”