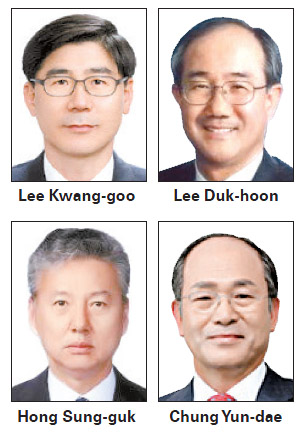 The appointment Friday of Lee Kwang-goo as the new president of Woori Bank appeared to lend more credibility to public insistence that the financial industry has become increasingly dominated by those with connections to powerful government officials or politicians.

The announcement came as a blow for some critics, who have long argued that a massive overhaul is necessary for development and progress within the Korean financial industry.

At the heart of their proposal lies the need to root out the tradition of revolving-door practices, known here in Korea as “parachute appointments,” in which people with political connections to the president or ruling party are tasked to head corporations, including in the financial sector.

Lee, who was rumored to be a strong contender to take over Woori Bank even before the organization launched a candidate recommendation committee, is a member of a group that has become increasingly more influential since the advent of the Park Geun-hye administration known as the “Seogeumhoe,” an unofficial clan of financial figures who graduated from Sogang University, which is also the president’s alma mater.

Woori Bank’s president recommendation committee stated on Friday that Lee is a seasoned veteran with experience across the banking sector that will help strengthen the company’s ability to compete.

Yet, the announcement did little to quell concerns about his connections to the Seogeumhoe.

Lee Soon-woo, the former chairman & CEO of Woori Bank, abruptly tendered his resignation on Dec. 1, saying that his stay would “hurt the organization,” an implication that there may have been outside pressure for him to step down.

He was previously considered to be up for reappointment as the bank’s CEO and had been working hard with the financial authority since last year to privatize the bank and Woori Financial Group.

Across the board, the Seogeumhoe’s influence has steadily consolidated in the financial industry since the beginning of the Park administration, with a number of group members having been nominated as the heads of major financial institutions.

But the group itself precedes the current government, according to local news reports. Its original core consists of about 10 graduates from Sogang University who enrolled in 1975. The group itself was founded in 2007.

In September 2012, more than 300 got together at a year-end party to show their support for Park when she was running in the country’s 18th presidential race.

“Graduates from Korea University took over the financial industry during the former Lee Myung-bak administration and those from Sogang University are now replacing them,” one industry insider observed.

“But these days, those from the private sector are making noise because [these officials] aren’t deemed qualified, and only have a political link or background related to the current government.”