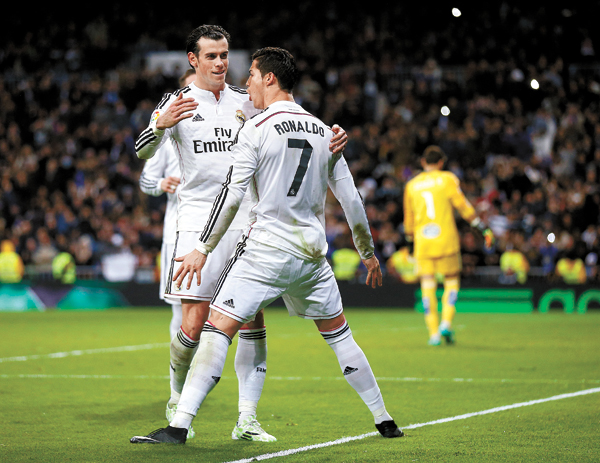 His 23rd career hat trick in La Liga gave him one more than greats Alfredo Di Stefano and Telmo Zarra.

Ronaldo’s 21st, 22nd and 23rd goals through 14 rounds also ensured Madrid its 18th consecutive victory across all competitions under Coach Carlo Ancelotti, matching a mark for Spanish teams established by Barcelona in 2005-06.

Ronaldo opened at the Santiago Bernabeu from the penalty spot in the 36th minute after he fell following light contact with a defender. He struck again in the 65th and 81st.

“It’s a privilege to play with [Ronaldo],” said Madrid defender Sergio Ramos. “You would have to invent words to describe him. He may be in his best moment.”

Ronaldo received a standing ovation when substituted for late, after taking his overall tally to 29 goals in 21 games this season.

He led the Spanish league with 31 goals last season. Lionel Messi holds the record for the most goals in a Liga campaign with 50 in 2011-12.

Ronaldo is already well on pace to repeat not only as the league’s top scorer - Neymar is second with 11 - but he also is making a strong bid to defend his award as the world’s best player.

Madrid’s commanding win was marred only by losing James Rodriguez, who asked to be changed and walked off the pitch in the 53rd.

Celta defender Gustavo Cabral suffered a more painful injury later and had to be carried off.

Ronaldo flirted with the goal in the 18th when he looped an acrobatic bicycle kick onto the top of the net before he tested Sergio Alvarez with a strike from Marcelo’s pass.

Marcelo continued to torment Celta’s defense with his incursions from the left flank, and his cross led to the opening goal when Ronaldo collapsed after defender Jonathan “Jonny” Castro touched his arm.

“It was a little unfair, we were in the game until then,” Jonny said. “I touched him, but he fell at the last moment.”

Ronaldo sealed the win by stabbing home the ball after Madrid hemmed Celta into its box.

He got his third goal from another cross by Marcelo, expertly using his left foot to score.

Atletico churned out the win at Elche with defender Jose Gimenez firing in the first goal in the 17th to end a dizzying series of one-touch passes by Siqueira, Jorge “Koke” Resurreccion and Arda Turan from a set piece.

Striker Mario Mandzukic finished Elche off in the 53rd by sprinting onto Gabi Fernandez’s lob and firing the ball inside the post.

Also, Cordoba’s 42-year wait for a top-tier victory finally ended with a 1-0 win at Athletic Bilbao, while Malaga won 1-0 at Deportivo La Coruna to rest in sixth place overnight.

Cordoba hadn’t won in 13 league games this season after returning to the top flight for the first time since 1972.

But Cordoba striker Nabil Ghilas pounced on Ander Iturraspe’s poor pass, leapt over Carlos Gurpegui’s sliding tackle, and beat goalkeeper Gorka Iraizoz for what proved to be the winner in the 23rd.