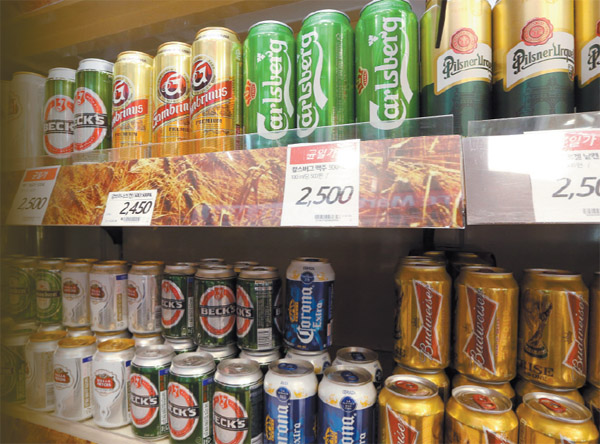 Before she was an exchange student in Manheim, Germany, four years ago, Choi Seon-hye never considered herself a beer enthusiast.

Prior to what she calls “an eye-opening experience to the world of beer,” she had tried only Hite, Cass and Max, finding their taste “not that appealing.”

“In Germany, I had a bottle of beer made by a brewery called Eichbaum, and it was something I’d never tasted before. I really liked the robust flavor,” said Choi, 27, who majored in German at college.

By the time she returned to Korea, a broad spectrum of European beer had made inroads after implementation of a free trade agreement with the European Union. 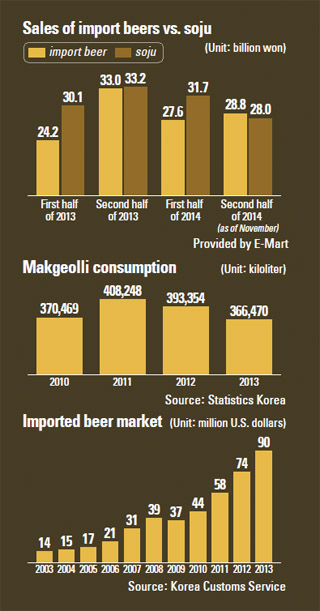 She occasionally drops by discount supermarkets and picks up beer - usually from German breweries. “It is hard to get Eichbaum here, but I still have some decent options, such as Erdinger and Paulaner.”

Choi personifies a shifting trend in which a wide range of imported beer and wine gain traction among an influx of young, female drinkers and the changing tastes of existing drinkers in search of more robust, authentic choices. At the same time, demand is waning for local lager beer and traditional alcoholic beverages such as soju and makgeolli.

Earlier this month, E-Mart, the country’s largest discount supermarket chain, announced that sales of imported beer from July through November surpassed those of soju for the first time. Sales of foreign beer stood at 28.8 billion won ($25.7 million), compared to 28 billion won for soju.

The most popular import label was Asahi, followed by Heineken.

Long gone are the days when seniors at college filled bowls with makgeolli and insisted that freshmen drink them in one sitting. The strong drinking culture, often aimed at consolidating bonds and loyalty, has given way to more moderate drinking.

“Unlike when I was a freshman, seniors don’t typically demand a strong shot of soju,” said 28-year-old Kim Jae-min, a senior at Yonsei University.

When Kim enjoys casual drinks with friends after mid-term or final exams, he also opts for imported beer.

“I feel import beers are more malty compared to the traditionally popular lagers [Cass and Hite]. At the same time, they don’t cause a bad hangover the next day, like soju does.”

More importantly, however, the young man is conscious of the image that accompanies soju and makgeolli.

“To be honest, soju and makgeolli remind me of alcoholic men in their 40s or 50s with beards, while imported beer consumers have an image of being young and cool.”

In a testament to the growing popularity of global beer brands among young people, 200 GS 25 convenience stores near colleges nationwide reported a 28.7 percent increase in sales of imported beer in the first half of the year. During the same period, sales of soju increased 3.8 percent and domestic beer 1.5 percent.

College students indulging in imported beer might sound a bit extravagant. However, the price gap between local and imported beer has narrowed at discount chains and even convenience stores.

Multiple sources in the liquor industry said retailers can offer 30 to 50 percent off because of the large retail margins of many import beers.

On the other hand, Korean law bans local breweries from offering discounts below wholesale prices.

Boosted by strong sales, the amount and variety of imported beer has surged dramatically over the past 10 years. From 2003 to 2013, the value of imported beer jumped from $14 million to $90 million, according to the Korea Customs Service.

Imported wine also has seen a surge in sales.

“We dedicated a section to wine because of its popularity,” said a 39 year-old employee at E-Mart near Gongdeok Station, western Seoul.

While imported alcoholic beverages are in their heyday, domestic products are on a downward spiral.

The amount of makgeolli consumed by Koreans peaked in 2011 at more than 400,000 kiloliters (105.7 million gallons). Since then, the consumption has steadily dropped, reaching 366,470 kiloliters last year.

Experts point out that domestic beverage makers have been somewhat complacent.

“Soju and makgeolli producers didn’t pay attention to innovation to attract more customers and were rather stingy on research and development,” said Kim Jin-man, industrial engineering professor at Chonnam University who also runs a research institute on makgeolli.

“So, for now we will put more effort into product development and marketing to revive the traditional beverage market.”