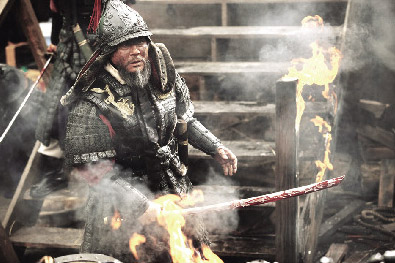 The period flick “The Admiral: Roaring Currents” earned $2.6 million this year, the highest among Korean films released in North America so far.

According to CJ E&M, the movie’s distributor, the film opened on Aug. 30 at 30 theaters across the United States and Canada.

Before then, “The Host” (2006), directed by Bong Joon-ho, and “Spring, Summer, Fall, Winter… And Spring” (2003), by Kim Ki-duk, were the highest-grossing Korean films to have opened across North America.

Centered on the historic Battle of Myeongnyang in 1597, when Joseon Dynasty (1392-1910) Admiral Yi Sun-sin faced hundreds of Japanese warships with just 12 vessels under his command, the film attracted more than 10 million moviegoers in Korea alone earlier this year.

“The Admiral: Roaring Currents” has been released in Indonesia, Vietnam, Thailand, China and the Philippines so far.