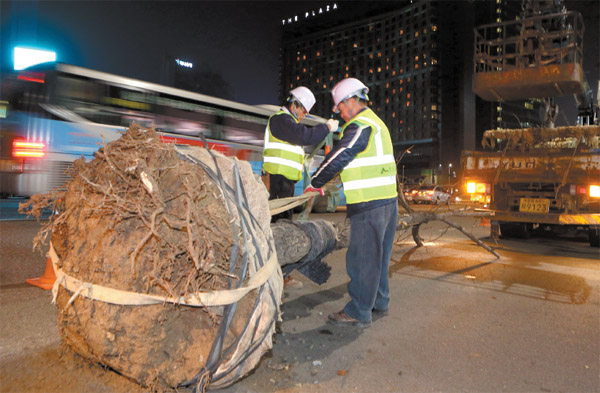 During the last week of November, the Seoul Metropolitan Government cut down 33 female gingko trees that produce seeds in the downtown area as a response to mounting complaints about the smell. [JoongAng Sunday]

You know fall is here when the leaves turn a colorful array of red and yellow.

But another indication of autumn in Korea is the stink of the gingko nut.

The smell is so strong that if you happen to step on one, it’s likely you will be spreading the odor wherever you go for the rest of the day.

The stink is often described as similar to vomit or rotten eggs.

And the official fight against it kicked off in Seoul during the final week of November. The Seoul Metropolitan Government removed 33 female gingko trees - which produce seeds - from areas in the city’s downtown where human traffic is high.

The trees were transplanted to city-run facilities in and near Seoul.

“We chose trees that block people’s passage the most,” Kim Won-sik from the Green Seoul Bureau’s landscape division told the Korea JoongAng Daily. 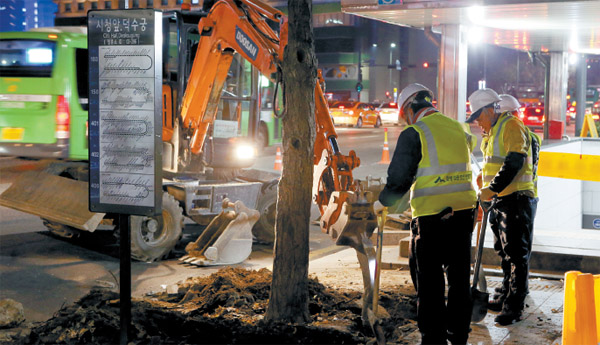 During the last week of November, the Seoul Metropolitan Government cut down 33 female gingko trees that produce seeds in the downtown area as a response to mounting complaints about the smell. [JoongAng Sunday]

They also selected dormant adult trees and those whose branches were relatively thin - less than 25 centimeters (9.8 inches) in diameter - as thick ones would be less likely survive when planted elsewhere.

Seoul City completed the move ahead of schedule, which was set for early December.

It took an average of one and a half hours per tree, he said.

This is only the beginning of the city’s battle against the smell of gingko.

Should the removal of the trees be approved by most Seoul citizens, the city’s government plans to expand the scheme.

In April, it announced that it will replace 300 female gingko trees with their male counterparts each year, until 2017, as part of a larger plan to help reduce unpleasant aromas in the city. Other projects included installing smell sensors at septic tanks to alleviate the stink of sewage.

In addition, the Seoul government also said it will use fruit-picking tools to get rid of the gingko nuts before they fall to the floor and pop open, which worsens the smell.

However, this is also only a trial as the money that goes into the adoption of such tools and the necessary manpower needs to be weighed against just how effective the measure is in reducing the problem.

“Finally,” said Je Ji-yeong, a mother of two in Gangseo District, western Seoul, who welcomed the decision. “They stink and make the streets filthy.”

She added they should be replaced with maple trees as they also change color in the fall and are equally as beautiful.

But not everyone agrees with Je.

Kim Hyeong-moo, an office worker in Yeouido, central Seoul, argues that the smell is not a big deal. “It’s not like they smell all year around,” he said. “Why spend taxpayers’ money cutting them off? I think it’s an overreaction.” 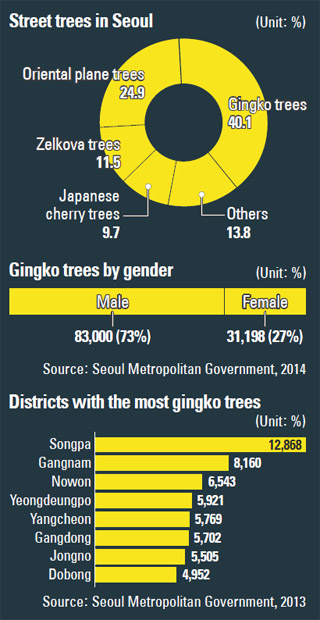 The gingko tree, which is native to Asia, is dioecious, which means there are males and females. The female gingko, which produces the seeds, are coated in two types of acid: butanoic and hexanoic. It’s this combination that gives off the unpleasant smell.

Gingko trees are also known for their resilience. Several survived the 1945 atomic bombing of Hiroshima, Japan. They can also endure smog, road salt and pests.

The nuts, although nutritious, should not be consumed in large quantities as they contain a poisonous ingredient.


Gingko and the city

Koreans mostly planted willow trees in the 1970s along the roads in metropolitan areas as they grow well without needing much care.

In the 1980s, they preferred the yellow poplar and the oriental plane trees, which stand up well to pollution.

It was only in the 1990s that gingkos became Korea’s representative street trees. Gingkos were planted in large quantities ahead of the Asian Games held in Seoul in 1986.

The gingko tree is often partly associated with Confucianism in Korea because the trees were probably brought to the country from China, as the school of thought was also introduced from that country.

Gang Pan-kwon, a history professor of Keimyung University, wrote in his 2011 book “Gingko Tree: The Saint of the East Embracing a Story” that the nut’s long life and the fact that it is not related to another plant species are common denominators with Confucianism, which its fans say is unlike any other philosophical or ethical tradition.

Due to these reasons, gingkos are often found in places related to Confucianism in Korea.

For instance, there are two huge gingko trees - believed to be about 500 years old and designated as Natural Monument No. 59 - in Munmyo, a Confucian shrine complex in Jongno District, central Seoul.

There are also some gingko trees that are associated with the Japanese colonization (1910-45) of Korea.

The Japanese planted 29 gingkos in the road that stretches southward from Gyeongbok Palace’s Gwanghwamun Gate. For decades the trees were considered a symbol of Sejong Road, although many Koreans still hold onto resentment over the colonization.

The trees were removed when a square was built in the Gwanghwamun area in 2009. But in respect of nature and despite their negative connotations, the authorities planted the 100-year-old trees in nearby parks.


Seoul is not alone

However, Koreans are not so forgiving with gingko trees on the streets or when they block their commute.

For the past several years, complaints over the smell of the gingko nuts and the mess they make have flooded the Seoul Metropolitan Government, prompting the city to take measures.

Seoul city has been encouraging district offices to plant male gingko trees rather than their female counterparts for years.

However, identifying the gender of the trees, which only bear nuts after 15 years, was a major hurdle.

Before that, Koreans attempted to identify the gender of the trees by studying their branches. If they stretched upwards they were male, and if they stretched downward were female.

But this only has a 60 percent accuracy rate.

Also, in rare cases, there are gingkos that are both male and female. These trees are male but undergo a metamorphosis and end up producing nuts.

Today, gingko trees make up about 40 percent of street trees in Seoul, followed by the oriental plane trees (24.9 percent) and Zelkova trees (11.5 percent).

Twenty-seven percent of gingkos in Seoul are females.

By district, Songpa had the most gingkos at 12,868 in 2013, according to figures by the Seoul Metropolitan Government.

However, regions outside Seoul are also suffering from the smell of the gingko and are following in the footsteps of Seoul, cutting the trees and replacing them with their male versions.

On Nov. 29, the Jeonju regional government in North Jeolla also announced that they will remove gingko trees in the city’s downtown area and plant males instead.

“Every year, before the nuts fell onto the ground, we picked them up and distributed them for free to welfare centers, but complaints about the smell still increased,” Kwon Hyeok-sin of the Jeonju City said. “We plan to replace [female trees] with male ones in stages.”

A debate over what to do about the smell of gingkos also took place in the United States several years ago, although not all cities opted to cut the trees down or transplant them.