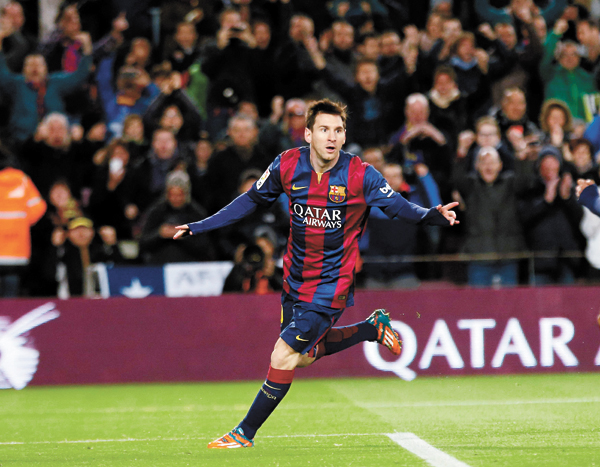 Barcelona’s Lionel Messi celebrates after scoring his second goal against Espanyol during their Spanish first division match at Camp Nou stadium in Barcelona on Sunday. [REUTERS/NEWS1]

Lionel Messi scored another hat trick to reach the 400-goal mark for Barcelona and spark his team’s 5-1 comeback victory over Espanyol in the Catalan capital derby on Sunday, keeping the winners second in the Spanish league.

Messi matched Cristiano Ronaldo’s three-goal performance in Real Madrid’s win the day before to ensure Barcelona stayed within two points of its fierce rivals at the top of the table. It was Messi’s third hat trick in two weeks, having also netted three goals against Sevilla in the league and at Apoel in the Champions League.

Sergio Garcia put Espanyol in front in the 13th minute in a good first half for the visitors at Camp Nou, but Messi curled home the equalizer in injury time before the break and Barcelona never looked back.

Messi fired in his second in the 50th and added a third after Gerard Pique and substitute Pedro Rodriguez had scored in a second half completely dominated by Barcelona.

“Messi is a football legend,” said Espanyol Coach Sergio Gonzalez. “We were the better side in the first half, but Leo’s goal was a tough blow. We couldn’t forget it and 15 bad minutes cost us the game.’’

Already the club’s all-time top scorer, Messi’s 29th career treble for Barcelona was his 400th, 401st and 402nd goals for the club, including friendlies. They took his league tally for this season to 13 goals, behind Ronaldo’s runaway total of 23.

Carlos Bacca netted early to help secure Sevilla’s 1-0 win at Rayo Vallecano and tighten its hold on fourth place, while Alvaro Negredo scored his first goal for Valencia before it conceded a late equalizer to slip 1-1 at Granada.

After a start to the season when Messi stood out for his playmaking, he is again scoring goals in bunches, and last month became both the leading scorer in the history of both the Spanish league and the Champions League.

His scoring burst comes with Ronaldo also in spectacular form and both star forwards are again among the finalists for the Ballon d’Or award, which Ronaldo won last year. The winner will be announced on Jan. 12.

“Leo’s first goal was the key,’’ said Barcelona Coach Luis Enrique. “I don’t know if he and Cristiano feed off one another. Our interest is that he gives us all he can and is involved in every facet, scoring, assisting and even in defense.’’

Felipe Caicedo’s pressure led to Espanyol’s goal when the striker stole the ball from Sergio Busquets, dribbled forward pulled away from Pique before firing under goalkeeper Claudio Bravo.

Barcelona turned to Messi to spark its comeback.

Having already hit the crossbar with a free kick, Messi received Xavi Hernandez’s pass and used two quick touches before threading a left-footed shot through the crowd and just inside the upright.

He got his second after halftime when Barcelona was on the break. Neymar led the way before Luis Suarez crossed for Messi, who poked the ball under defender Juan Fuentes and drilled it home with his right boot.

Espanyol was then caught off balance when Pedro scored in the 77th before Messi worked a one-two with the forward to get his hat trick in the 81st.