Korean industry loses out to China

Korean industry loses out to China 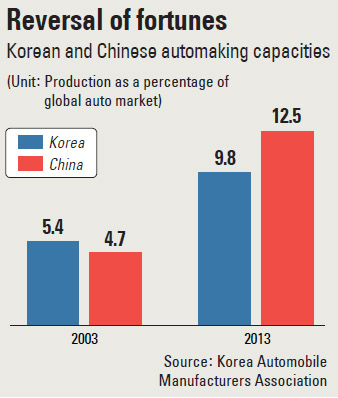 Though China has been steadily rising as an economy, Koreans have comforted themselves with the thought that they are ahead in many industries that demand high-end technologies, including smartphones, cars and semiconductors.

According to a report released by the Federation of Korean Industries (FKI) on Monday, Korea has fallen behind China in four out of six major industries that it used to lead: smartphones, cars, shipbuilding and petrochemicals.

The FKI studied 10 major Korean exports to determine the country’s competitiveness in the world in terms of global market share calculated either on total production or sales this year.

Koreans may consider smartphones a simple choice among Apple and Samsung or LG. But outside Korea, people are plunking down money for Chinese smartphones. The FKI said the combined market share for nine major Chinese manufacturers including Huawei, Lenovo and Xiaomi was 31.3 percent, beating out Samsung and LG Electronics’ 30.1 percent. The smartphone market was calculated based on sales figures.

In the second quarter of 2012, Samsung led the world smartphone market with 31.1 percent market share after selling 48.7 million units, followed by Apple with 16.6 percent and Huawei with only 4.2 percent. But Samsung’s market share retreated to 25.2 percent in two years, while Huawei’s rose to 6.8 percent, making it the world’s No. 3, followed directly by Lenovo (5.4 percent) and Xiaomi (5.1 percent). None of the three Chinese companies were in the top five two years ago.

LG’s market share is even lower than Xiaomi’s at 4.9 percent after selling 14.5 million units this year, the FKI said. That ranks LG in sixth place.

Korea is jammed between Apple’s iPhone, which is still strong as a premium smartphone, and China’s middle-to-low priced products.

Korea successfully boosted its market share over 9 percent after it opened factories in foreign countries including China. But China reached the 10 percent milestone by adopting advanced technologies and scouting engineers from advanced nations.

In shipbuilding, China also leads Korea in the number of orders won, the number of ships built and backlog of orders. The FKI said that China became the No. 1 nation in the world by all three measures due to aggressive financial support by its government.

The situation isn’t much different in the petrochemical industry.

China’s market share, calculated based on the production of ethylene, was 12.2 percent last year as they produced 18.76 million tons. Korea produced 8.35 million tons, giving it a 5.4 percent market share.

“The Chinese government has been investing massive amounts of money in many industries that Korea has been seriously involved in,” said Yoo.