Tsingtao rises above its American counterparts

Tsingtao rises above its American counterparts 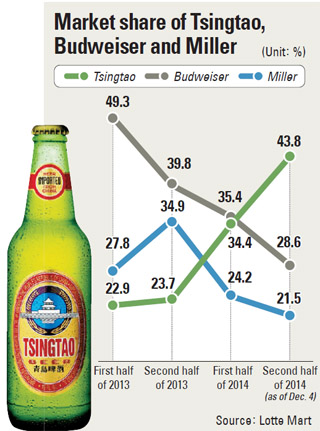 Overshadowed by American and Japanese breweries, Tsingtao has long kept its place as the runner-up in the domestic liquor market. But the Chinese brewery with an international following has finally left global beer makers Budweiser and Miller behind.

Lotte Mart said on Monday that Tsingtao became the No. 1 imported beer in terms of market share in the second half of the year as of Dec. 4, followed by Budweiser and Miller. The Chinese beer took 39.9 percent of the market share compared to Budweiser’s 32.1 and Miller’s 21.5 percent.

Industry sources say Tsingtao’s success is due to multiple factors.

One reason is the growing number of Chinese-style lamb skewer restaurants, where a wide array of Chinese drinks are available. Guro District has become densely populated with Chinese workers, so the area is now full of restaurants that cater to them.

Those restaurants tend to sell Chinese beers like Tsingtao and Harbin. Lamb skewer stores are also expanding to popular areas around Hongik University and Gangnam District. In fact, a street filled with Chinese-style lamb restaurants has emerged near Konkuk University in southeastern Seoul.

China also took up a major part of the traditional liquor market in the second half of this year. Sales of Chinese traditional alcohol such as Erguotou and Kaoliang were higher than that of Japanese counterparts such as sake. The market share of Chinese distilled liquors was 53.9 percent while Japanese liquors took up 46.1 percent. Last year, Chinese liquors accounted for 35.8 percent of the market share versus Japan’s 64.2 percent.

A sales manager in charge of imported alcohol at Lotte Mart said the major shift toward Chinese brands was due to consumers’ willingness to try new things.

“Only a few years ago, local consumers would only go for a few, select import beers,” said Lee Young-eun. “But now they are more open-minded and eager to try new types of drinks.”