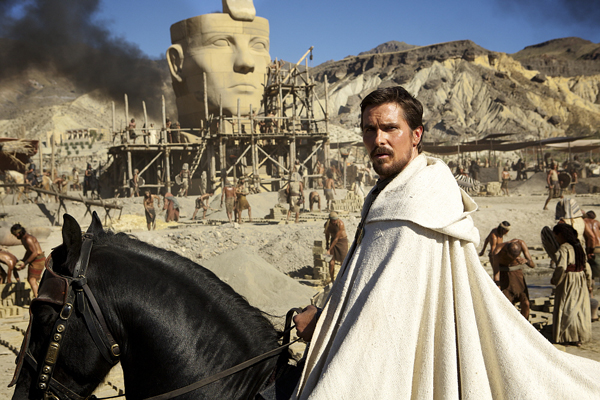 Ridley Scott’s “Exodus: Gods and Kings” opened in first place in Korea with 579,357 viewers. Provided by the distributor

Ridley Scott’s biblical epic “Exodus: Gods and Kings” dethroned Christopher Nolan’s “Interstellar” after a four-week reign at the local box office during the first weekend of December, according to the Korean Film Council on Monday.

Scott is an acclaimed director known for crafting extraordinary warrior movies such as “Gladiator” (2000) and “Robin Hood” (2010).

The 153-minute feature is a visual spectacle that retells the story of the Old Testament with Moses, played by Christian Bale, freeing the Hebrew people who were enslaved by the Egyptians.

Nolan’s “Interstellar,” which ended its Imax run on Dec. 3 due to expired contracts between distributors and theaters, slowed down in the box office. It gathered ticket sales of 481,138, adding to its 9.1 million total and bringing its profit up to $64 million as of 2 p.m. yesterday.

Due to requests from fans, however, CGV decided to allow Imax screenings of “Interstellar” from Monday until Wednesday after 10 p.m. in 11 of its Imax-equipped theaters nationwide.

Brad Pitt’s war movie “Fury” was in fourth place, a notch down from last week, garnering 121,257 moviegoers and making 9.5 billion won so far in Korea.

The re-opening film “Howl’s Moving Castle” was spotted in seventh with 64,319 people heading to the cinema to see it.