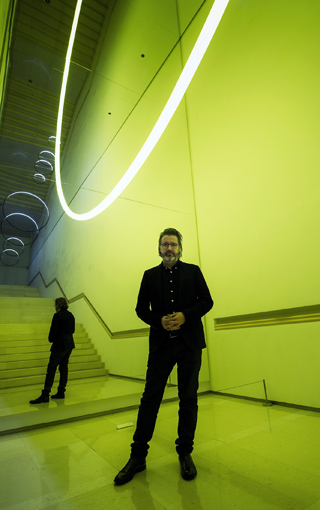 Olafur Eliasson stands inside his site-specific installation “Gravity Stairs”(2014) at the Leeum, Samsung Museum of Art. Provided by the museum.

Artist Olafur Eliasson is mostly famous for his large-scale installations such as “The Weather Project”(2003), in which he recreated the sun and shone a sublime light through a mist filling the spacious Turbine Hall at London’s Tate Modern.

But during a lecture at the Leeum, Samsung Museum of Art in central Seoul late last month, the Danish-Icelandic artist showed off a series of tiny Little Suns, his most recent project.

A Little Sun is a portable solar-powered LED light that looks like a yellow sunflower.

The artist conducted a short performance in collaboration with more than 200 attendees of the lecture, flicking the Little Suns on one by one, waving them and turning their brightness down. The performance showed that the lights were very strong compared to their size.

Afterwards, Eliasson explained that five hours of charging each Little Sun produces up to three hours of bright light and up to 10 hours of low light. They will help people in underdeveloped regions who cannot afford enough electricity to study and work at night, he explained.

“Many people don’t have access to power,” the 47-year-old artist said. “With Little Sun, we bring power to people without power. In addition, children can become familiar with energy from renewable sources.”

In the lecture, he emphasized that his art in general encompasses a certain perception of nature and brings the natural world from outside to inside museums. He added that he puts nature in a different context so that people can see it from a whole new angle and that he uses the power of art to affect social change.

“How can you say something without excluding anybody? The answer is art,” he said. “[From my art] people get very different experiences in the same place ... They can be together without having to be the same.”

Eliasson was invited to give the lecture as he is participating in the museum’s “Beyond and Between” show with “Gravity Stairs,” a site-specific installation.

The Korea JoongAng Daily briefly interviewed the artist after the lecture at the Leeum. Here are some excerpts from the interview.

Q: Your art appeals not only to connoisseurs but also to people who are not big fine-art fans. This could be because your work reminds people of science fiction. Are you ever inspired by sci-fi movies?

Nature is a constant source of inspiration to you, particularly light. Why is this?

It is because it’s very democratic. Everybody has opinion about that. My real interest is in the structure of experience. Light and nature are good materials to examine, investigate and provoke experiences.
I often talk about nature but, in truth, my real interest is people. Nature is just a way of touching and reaching people.

What do mirrors mean to you?

Mirrors are fantastic materials because they are elusive. Historically, they have had a very interesting relationship with ideas about subconsciousness. They are also considered to be an entry into a parallel world.
I like mirrors because they are a combination of something well known - everybody has a mirror in house - and something enigmatic.

As it is seen from your “Little Sun” project, now the borders between art and social campaigns are collapsing. Do borders no longer exist between the two?

It depends on the situation. For me, these definitions are relative to the context. I think all art has a social element. There is no art that does not contain, if not social, at least a little bit of ethical question in it. You cannot separate aesthetics from ethics.

Not yet. But I’m more optimistic than pessimistic. If you look at the last 20 years, you will see the number of people having a relationship with culture increasing.