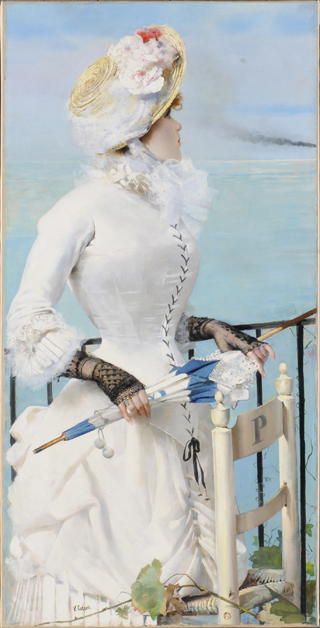 An exhibition featuring the landscape of Normandy at Seoul Arts Center in southern Seoul is imbued with the stunning scenery of the shoreline in northwestern France.

Among more than 100 pieces on display by renowned artists from the 19th century to modern times at “The Seine Estuary - The Invention of a Landscape” is a painting capturing Claude Monet’s brilliance in portraying atmospheric effects and lights.

The piece looks like an incomplete work with its rough brush strokes, yet the ephemeral effects of light are well depicted.

“The painting ‘Fishing Boats’ was criticized as unfinished, but its value was recognized later because it was Monet’s first experimental piece,” said Jang Yoon-jin, the exhibition’s curator.

Claude Monet’s “Fishing Boats” (1884) and Raoul Dufy’s “Maritime Fete and Official Visit to Le Havre”(1925) are part of “The Seine Estuary - The Invention of a Landscape” exhibition. Provided by Seoul Arts Center

“Monet took his easel outside the studio and started to capture light, as the beginning of Impressionism,” the curator added.

As its title suggests, the exhibition mainly contains paintings from Impressionists, including those by Eugene Boudin, who was an inspiration for Monet, and J. M. W. Turner, the well-known English painter and master of romanticism.

The many-hued landscapes of the French coast, probably best known for the D-Day landings in World War II, are documented by the painters featured in the exhibition. The scenery is therefore varied, overwhelming and peaceful.

“Landscapes were regarded as anachronistic paintings before the birth of Impressionism since they were used to decorate the church or the structures” said Jang.

“However, the Impressionists totally changed this prejudice. The pieces in the exhibition demonstrate how light can be illustrated in a profound way.”

In the second-to-last section of the show, the broad brush strokes and primary colors typical of Fauvism are employed in “Maritime Fete and Official Visit to Le Havre” by Raoul Dufy.

Yet the tones are subdued and the composition structured in this work, which creates an ominous mood that captures attention after the dozens of warm and descriptive Impressionist paintings in the rest of the exhibition.

As a famous Fauvist and a lover of Normandy, where he was born, Dufy’s work truly embodies the French area.

His later work in particular also differs from Impressionism as it includes ordinary people and diverse experimental genres - including Fauvism, cubism and expressionism.

In the final and middle part of the show, both realistic and artistic photography of Normandy’s landscapes are included to outline the history of the region.

According to Jang, the original organizer of the French exhibition wanted to give viewers opportunities to compare the photographs and paintings of Normandy.

On the whole, the display allows viewers to experience Normandy, where many renowned European artists have lived, and allows them to see different styles of modern art alongside the scenery of the French coast.

“The Seine Estuary - The Invention of a Landscape” is currently open and continues to February 15.