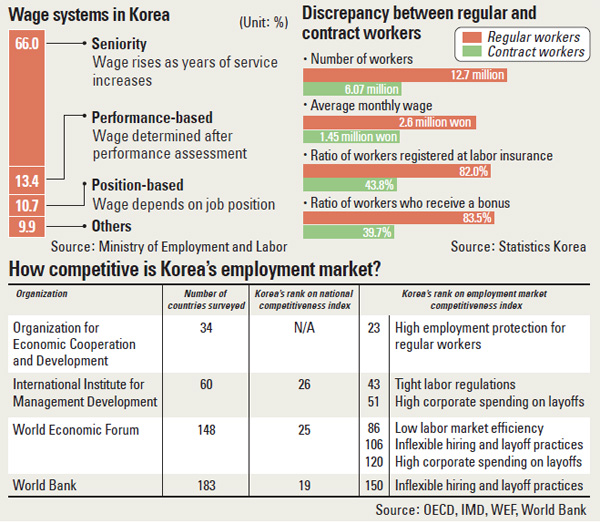 The Ministry of Employment and Labor last week announced its intention to reform the labor market next year, saying the overhaul will focus on making employment systems in Korea more flexible in how employees are hired and paid.

Lee Ki-kwon, the minister of employment and labor, explained the government’s labor market reform plan at a panel discussion on Thursday in Yeouido, southwestern Seoul.

Vice Minister Koh Young-sun was set to deliver the opening speech at the discussion, but Lee volunteered instead, according to ministry officials, because he wanted to propose his plan for 2015.

In his speech, the minister said that reshuffling and employee training should precede layoffs.

“Employers should offer underperforming workers job training or new positions before considering laying them off,” Lee said. “If an employer concludes there is no other choice but to fire an employee, the company should be able to provide clear reasons and processes.”

Lee’s statement comes after remarks from the deputy prime minister for the economy, Choi Kyung-hwan, on the need for a major overhaul in the Korean labor market at a press conference on Nov. 25.

He said the current system “overprotects regular workers [and their employment status]” and prevents contract workers from getting better pay and conditions.

Choi said that next year he will consider creating a policy to reduce excessive protections of underperforming workers while improving the welfare and salaries of contracted workers.

But labor unions have criticized Choi’s remarks, saying he wants to make layoffs of regular workers easier and to hire contract workers instead, which could lower unemployment rates and encourage consumption.

On Thursday, the labor minister also mentioned the government’s desire to improve contract workers’ labor conditions and cut their working hours. Lee emphasized that the main goal of the ministry would be to make labor regulations more beneficial to contract workers.

“The government has to make the local labor market more flexible in managing workers while helping employ underprivileged people,” he said at the discussion. “Many older workers in their 50s and 60s who returned to the work force after retiring from their full-time jobs are contract workers now. The only hope they have is to keep working even after the maximum employment period, which is now two years, comes to an end. Many have said that such rules have to change.”

As for problems with working hours, Lee said the weekly working hours should be lowered to 52 hours. Analysts say the current wage system, which is seniority based, should instead be performance based or related to the job position.

“The Korean labor market has severely lacked flexibility [in wages] because it is mainly fixed around the seniority-based wage system,” said Kim Joon-kyung, president of the Korea Development Institute, at the Nov. 25 press conference with Finance Minister Choi.

Kim pointed out that seniority is the main reason for the wage gap in Korea, rather than productivity or performance.