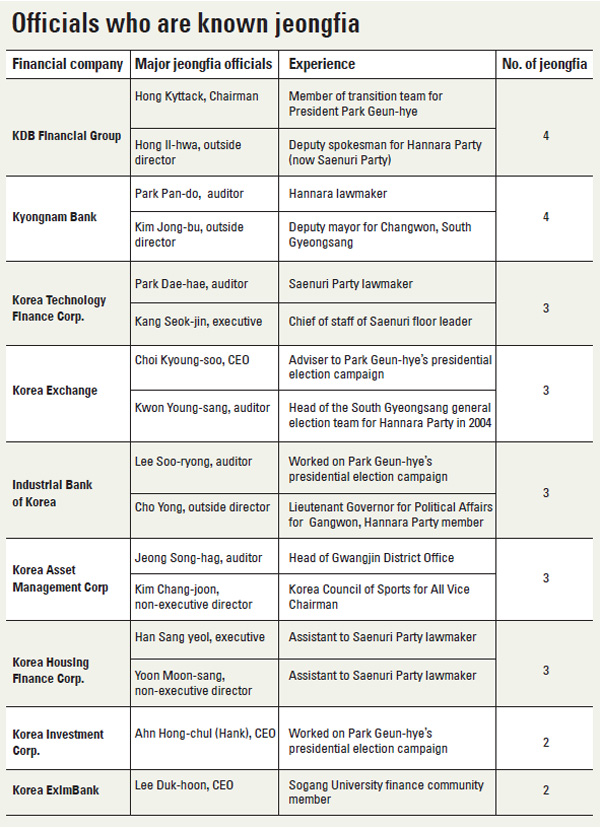 The Korean financial industry, which has tried to prevent officials from parachuting into high-ranking executive positions from their posts at government institutions, commonly referred to as “gwanfia,” is now dealing with officials with strong political connections taking executive posts.

The politicians who are taking up posts previously occupied by former government officials are referred to as “jeongfia,” which is a mixture of the Chinese-Korean word “jeong,” meaning politics, and “fia” taken from the second syllable in “mafia.”

According to the financial industry, jeongfia now account for 18 percent of the 279 executives - including CEOs and auditors - at 36 financial companies that have huge government investments.

These are people that either were politicians or worked for politicians as a staff member or adviser during the early stages of the Park Geun-hye administration or during campaigning ahead of the election.

One person who took up his position in the early years of the Park administration is KDB Financial Group Chairman Hong Kyttack.

When he was appointed to head state-owned KDB Financial Group in April last year, the labor union there protested because he had no prior experience working in finance, making it clear that the move was a parachute appointment.

Another jeongfia, Choi Kyoung-soo, was appointed as CEO and Chairman of the Korean stock market operator Korea Exchange in October last year. Like Hong, he has a strong connection to President Park as an advising professor during the last presidential campaign.

Ahn Hong-chul (Hank), who was appointed as Chairman and CEO of Korea Investment Corp. late last year, is also linked with the president. He was part of her team during the presidential race.

This year, officials with strong connections to political figures from their university days are continuing to take top spots in the financial industry without hesitation.

Korea Eximbank CEO Lee Duk-hoon, who assumed his post in March, is known to be one of the key members of the group of financial leaders from Sogang University.

The two men are rumored to be parachute-appointed jeongfia because their names were mentioned for the top position even before the brokerage firm and bank started to accept applications.

Several jeongfia executives have resigned, including Choi Hee-chul, who was in charge of risk management at Korea Housing Finance Corp., but the number has been small.

“Because the financial companies have no majority shareholders, it leaves the potential for much worse intervention in management and the appointment of executives, including CEOs, by external force,” said Park Kyung-suh, Korea University professor of business management, during a forum on Monday.

Park said that to solve the problem, financial companies must empower shareholders while enhancing board of directors’ evaluations and public notifications.