Cavaliers give the Nets a royal pasting

Cavaliers give the Nets a royal pasting 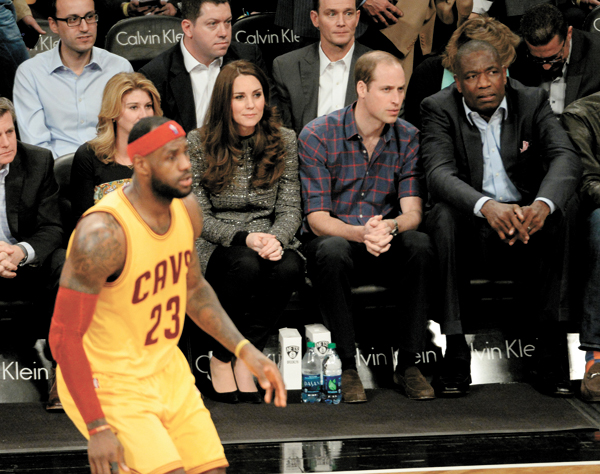 James and the Cleveland Cavaliers turned a close game into a clinic after Prince William and his wife, Kate, grabbed courtside seats, beating the Brooklyn Nets 110-88 on Monday night, local time.

“Yeah, they brought luck to us,’’ said James.

And then James brought gifts to them. He gave the Duke and Duchess of Cambridge cupcakes from a bakery in his hometown of Akron, Ohio, and a couple of Cavaliers jerseys: one for their son (Kate is expecting their second child) and another that read “Cambridge’’ on the back.

“It was their first time watching a basketball game, so it was an honor that I would be that guy they decided they wanted to watch,’’ said James.

Kevin Love was shooting free throws when the royal couple emerged from a tunnel with 7:14 remaining in the third quarter. Perhaps distracted by the loud roar, Love missed the second badly, leaving the game tied at 61.

“It was a little bit more of a distraction than people waving towels or waving whatever it is that they do,’’ Love said. “Yes, it was a big distraction. I just tried to make the second shot and it ended up being about a foot short.’’

But James, putting on a show that few others could, threw some sharp passes to go with his nine points in the period and the Cavs cruised from there to their seventh straight victory.

He finished with 18 points after joining Kyrie Irving and some Nets players in wearing “I Can’t Breathe’’ shirts during warm-ups.

That would’ve been the story most nights, but he had to share it with the royals’ arrival during their first visit to New York. They met earlier in the game with NBA Commissioner Adam Silver, celebrating a partnership between the Royal Foundation and the league to raise awareness about the importance of international wildlife conservation.

The buzz built as officials began gathering near the tunnel at halftime for the couple, and it may have amped up James, who had a quiet first half but took his game to another level in front of William and Kate, a day after saying it was an “honor’’ to have them watch him play.

James’ biggest statement before then came during the pregame layup line. He and Irving, along with Kevin Garnett, Deron Williams and two other Nets, wore warm-up shirts in support of the family of Eric Garner, who died July 17 after a police officer placed him in a chokehold when he was being arrested for selling loose, untaxed cigarettes. A recording of Garner’s arrest showed him gasping “I can’t breathe’’ during the fatal encounter, and thousands have protested a grand jury decision not to indict the officer since the announcement on Wednesday.

Williams had 13 points and 11 assists, but shot 3 for 14 for the Nets, who played without injured starters Brook Lopez and Joe Johnson.