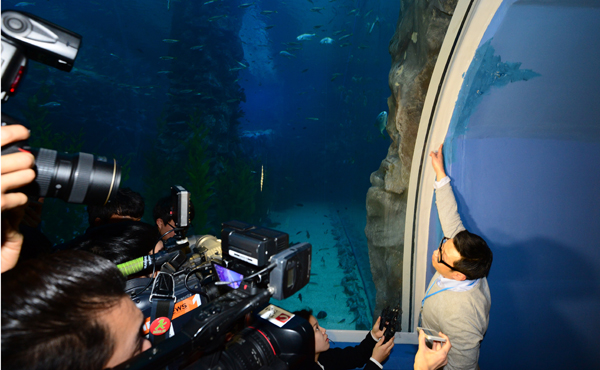 A Lotte employee points to a seven-centimeter (2.7-inch) crack in a wall next to a tank at the Lotte World Mall aquarium in Jamsil, southeastern Seoul, on Tuesday. Water has been dripping from the fissure since it was discovered on Saturday. [NEWS1]

Lotte World Mall is once again embroiled in a controversy over safety, this time due to a crack found in the 11,000-square-meter (118,000-square-foot) aquarium over the weekend.

According to the mall, the crack in the wall of the aquarium was dripping water from a nearby acrylic tank. The discovery of the seven-centimeter (2.7-inch) fissure is the latest in a string of safety incidents at the troubled mall, which opened in October.

Lotte said that it has been working to fix the damage since detecting it on Saturday. But it is suspected of not properly informing visitors to Lotte World Aquarium. 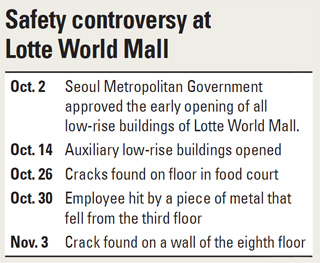 According to local media reports, the only safety measures taken by Lotte officials were to block off the area around the leaking tank by putting up signs that read “cleaning” and “environment improvement,” and telling visitors that the section near the leak was temporarily closed for improvements.

Lotte World Mall denied news reports that the floor near the leak was flooded by the water from the crack.

“The report was exaggerated,” said a representative of Lotte World Mall who requested anonymity. “Although there is a small crack, water drops at a speed that fills a paper cup in an hour.”

“The builder of the aquarium said that a minor leak can sometimes take place in aquariums, but it doesn’t pose a serious threat.”

Despite Lotte’s efforts to diffuse the controversy, news of the crack went viral online and generated a whirlwind of fear.

An electrical substation is located underneath the large aquarium hall, which could potentially make the leak more dangerous.

The public’s doubt over the safety of the buildings next to the 123-story Lotte World Tower stems from a string of accidents and the subsequent insufficient explanations from Lotte.

Not long after, a 46-year-old employee of a Lotte subcontractor was cut when a piece of metal fell on him from the third floor. His injuries were minor, but the accident deepened the public’s concerns. The metal component was reportedly attached to a glass banister on the third floor and fell to the ground after it was accidentally knocked off by the cleaning staff. There are reportedly dozens of similar parts in the building.

In early November, new cracks were spotted on the eighth floor.

Before the mall opened, a number of sinkholes that opened up nearby were rumored to be the result of the skyscraper’s construction.

The safety issues delayed the opening of the mall for several months and even now many Koreans are hesitant to visit because of safety issues. The accidents bode ill for Lotte because the public is still sensitive to safety due to the Sewol ferry disaster.

The government said that it will form an inspection team to carry out a safety check-up on the aquarium on Wednesday.