Ice-cup beverages are top-seller at mini-marts

Ice-cup beverages are top-seller at mini-marts 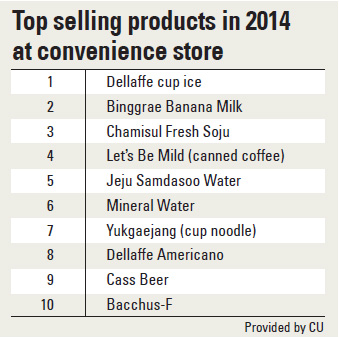 According to sales data compiled from January through November, the top-selling product at the four chains - CU, GS25, 7-Eleven and Ministop - was the ice cup. The ice cup comes with a drink of the customer’s choice, such as coffee or juice, that is packaged in a plastic pouch. The liquid is then poured into a plastic cup of ice. The drink became the most popular mini-mart item, taking the crown from Binggrae’s Banana Milk.

People like ice-cup drinks because they have a wide variety of uses, according to convenience store officials.

“If you think about typical beverages like canned or bottled juice, they are already prepared that way so that you can rarely change it to reflect your own taste,” said a representative of GS25, the second-largest discount chain. “But in the case of the ice cup, you can adjust the amount of ice and liquid to suit your needs. And prices are often below or slightly above 1,000 won [90 cents], similar to prepackaged beverages.”

The ice cup is also commonly used for beverages other than those packaged specifically for the product.

“Many customers buy the ice-filled cup along with tea, soda and fruit juice,” said Kim Hye-jeong, a convenience store worker near Gangnam Station. “In the past, the ice cup was sold exclusively in the summer, but now many people are looking for it even in the winter.”

The top 10 products at the four convenience stores overlapped significantly.

Although beverages took up most of the list, the product that showed the biggest sales growth compared to the previous year was thrifty cell phones.

The top three convenience stores, CU, GS25 and 7-Eleven, sell altteul phones under the mobile virtual network operator (MVNO) service, which have monthly fees of about half as much as the three major service providers.

MVNO phones are cheaper because the operators rent telecommunications frequencies from other companies.

Sales of the cheap phones increased almost 300 percent over the same period last year, due primarily to the implementation in October of stricter cell phone regulations.

The Mobile Device Distribution Improvement Act caps the amount of subsidies that carriers can provide at 300,000 won, raising the price of smartphones.

The product that had the second-highest sales growth was frozen tteokbokki.

In a joint statement, the convenience stores said that fully prepared food is popular among single people who live alone, especially college students.

The chain 7-Eleven attributed some of the sales growth to an increase of people in their 50s shopping at convenience stores. Sales to 50-somethings increased by 20.3 percent compared to the first 11 months of last year.