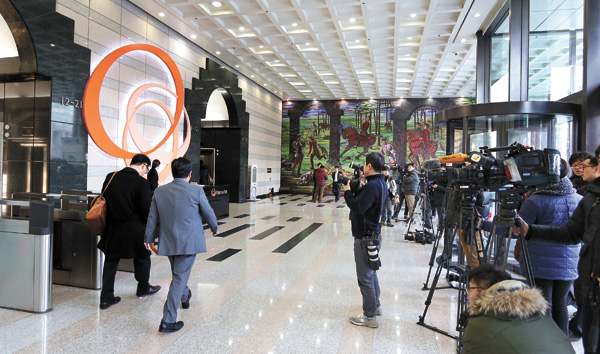 Prosecutors make a surprise raid Tuesday morning on a subsidiary of Hanwha Group in central Seoul in relation to the leaked internal Blue House document. [NEWS1]

Prosecutors made a surprise raid Tuesday morning on a subsidiary of Hanwha Group in central Seoul, saying a manager responsible for government relations possessed the leaked internal Blue House report that has plunged the Park Geun-hye administration into its greatest political scandal.

Prosecutors also arrested two police officers belonging to the intelligence department of the Seoul Metropolitan Police Agency earlier in the day for allegedly photocopying and circulating the confidential report dated Jan. 6 and authored by Park Gwan-cheon, a senior police officer seconded to work at the Blue House.

Park illegally removed two boxes of internal reports amounting to 100 pages from the Blue House when he ended his temporary duties with the Office of Civil Service Discipline under the Senior Presidential Secretary Office for Civil Affairs in February. He moved them to the intelligence department of the Seoul Police Agency before he was assigned to his current job at the Dobong Police Station in northern Seoul.

The two arrested police officers - known only by their surnames Han and Choi - allegedly leaked the report, according to the Seoul Central District Prosecutors’ Office. The two deny the allegation.

One of Officer Park’s main duties was to investigate corruption and irregularities throughout the government. He wrote the report about alleged back-room string-pulling by Chung Yoon-hoi, President Park’s former top aide and alleged power broker.

The report claimed Chung, who has no official government position, regularly met with 10 close aides to the president - including three incumbent presidential secretaries - to discuss state affairs and how their influence should be used.

They also allegedly started a campaign against the president’s chief of staff, Kim Ki-choon, by circulating rumors about him and other officials in top government posts, according to the report.

President Park and the Blue House insist the scandal is a mere collection of rumors and loose political gossip.

Park, the 48-year-old police officer, told prosecutors in questioning that he heard rumors about Chung’s faction from a “trustworthy” informant, without naming anyone. He denies leaking the internal report.

The scandal was initially touched off by the local daily Segye Ilbo on Nov. 28 in a report on the internal document titled “Current activity of the VIP’s [President Park’s] confidante [Chung] and rumors about the replacement of the Blue House chief of staff.”

After analyzing evidence and questioning figures involved, prosecutors have tentatively established a theory that the internal report somehow went from Park to the two policemen and eventually to several media outlets, including the Segye Ilbo, and Hanwha S&C. The Hanwha office that was raided for about 90 minutes Tuesday morning belongs to a senior manager at Hanwha S&C, a system integration arm of the conglomerate. Prosecutors suspect he helped Park author the internal report and leak it.

Prosecutors stressed that the raid had no relevance to the conglomerate and was entirely about the behavior of the individual manager.

Due to his responsibility to handle government relations, the manager is known to have an extensive network among the police, intelligence organizations and the media. He also knows Park Dong-yeol, 61, a former tax official whom the prosecution believes initially informed Park about Chung’s activities at the Blue House.

The prosecution considers Park - who formerly headed the Daejeon branch of the National Tax Service and now runs a private tax service - a key informant for the author of the report based on its analysis of phone records and email transactions between the two from last December through early January.

The investigation into the scandal is set to reach a new stage Wednesday as Chung appears at the Seoul Central District Prosecutors’ Office to be questioned.

He is a former son-in-law of Choi Tae-min, a late pastor who mentored President Park when she was playing the role of the de facto first lady in the 1970s after her mother was assassinated. Chung worked as Park’s chief of staff from 1998 till 2004. But little is known about his activities since.

The documents led many to believe that a power struggle was taking place between Chung and Park’s younger brother, Park Ji-man, given that Chung has a history of keeping tabs on the brother when he was serving as the chief of staff for Park.