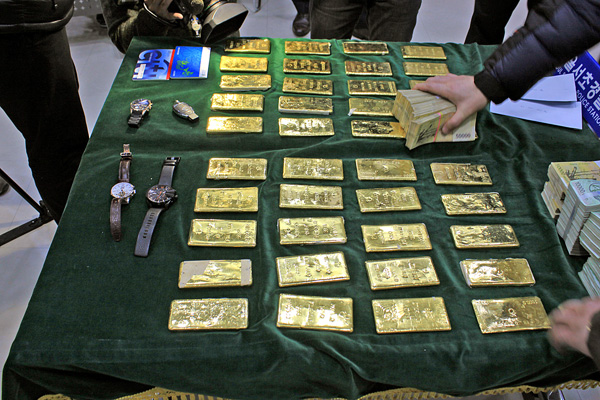 Gold bars and cash confiscated from the home of a man who stole billions of won worth of assets from a late businessman are shown to the press. The family of the deceased was not aware of the inheritance. Provided by Seocho Police Precinct

An elderly lady who resides in Seoul got an unexpected inheritance earlier this month, authorities said, after a plan devised by a group of scheming colleagues went awry.

The 84-year-old woman’s late husband, surnamed Park, was known around his neighborhood as a man of substantial wealth who took the profits he earned from real estate and stock trades and bought gold bars, believing it was the best way to safeguard his assets.

According to the Seocho Police Precinct, Park reportedly dug a hole in which he placed the box full of gold bullions and renovated the house so that a closet was built over the valuables.

He was later diagnosed with dementia, and in 2000 called 10 family members together, giving each person 10 gold bars. Park died in 2003 without ever having alerted his kin about the rest, and their home was eventually rented out as an office.

The remaining gold bars were discovered a decade later by an interior designer and his employees, who stumbled across the box on Aug. 15, after a fire broke out at the house.

The designer, surnamed Jo, 38, and two of his workers were repairing the office when they found the box, police said. Of the some 130 gold bars inside, they each took one and placed the box in its original location, vowing to take what they had done to the grave.

But the possibility of more didn’t leave Jo’s mind, and he and his girlfriend, surnamed Kim, returned to the house and stole the rest. The interior designer subsequently ran away with the gold to live with another mistress.

He sold about 60 gold bars to three jewelers, making 2.9 billion won. He spent more to rent an apartment in Seoul and invested 2.1 billion in a company run by an acquaintance. He also bought a Mercedes and spent millions of won daily on entertainment.

But Kim pursued her ex by hiring a private detective agency, and it was one of the employees there who reported the case to the police.

The Seocho Police Precinct caught up with Jo on Dec. 2 at his home, where they found 40 remaining gold bars and 225 million won in cash.

The confiscated gold bars and cash are being returned to Park’s 84-year-old widow, authorities said, and the items Jo bought, including his car and the apartment, will be sold via public auction. The money from the sales will be given back to the family.

An investigation is currently ongoing.