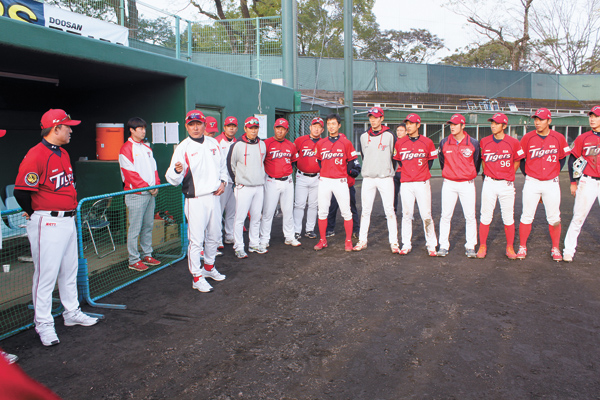 Manager Kim Ki-tai, left, talks to Kia Tigers players during a training session in November in Miyazaki, Japan. Provided by the Kia Tigers

Kim Ki-tai, who stepped down as manager of the LG Twins in April, will start next season at the helm of the Kia Tigers. And he is already starting to remake the team in his unique style.

Kim, who usually comes across to his players more like a big brother than a boss, sat down with the JoongAng Ilbo last week.

When asked about the team’s training last month, he replied, “Did they say the training was too hard? I thought I gave them enough rest.”

Hard training typically is associated with Hanwha Eagles Manager Kim Sung-keun, but Kia’s training last month was tough enough. The only difference was that Hanwha’s training was required for everyone, while Kia’s was optional. Even Choi Hee-seop, who rarely played in the past couple of years, joined the Tigers training camp last month in Miyazaki, Japan.

Kia has been on the decline since winning the Korean Series in 2009, and many players and coaches naturally fell into defeatism. After raising the trophy five years ago, the team advanced to the postseason only once, in 2011, and was eliminated in the first round. This season, the Tigers finished in eighth place, ahead of only the Hanwha Eagles.

Kim is trying to revitalize the team and get closer to them in his own way, just like he did with the Twins three years ago.

“I don’t know how the team is going to change, but I am confident I can communicate with the players,” he said.

One of the biggest mysteries this season was Kim’s resignation on April 23. LG waited 20 days for him to come back, but they finally named Yang Sang-moon as the new manager.

Baseball fans, in particular, wondered why Kim would leave after leading the Twins to the postseason for the first time in 11 years.

At the time of his resignation, the team was in last place after 17 games with 111 to go. Some said he gave up too soon, and there were rumors he had been offered a job at another club.

But Kim did not become Kia’s manager until late October, six months after his resignation, after Sun Dong-yeol stepped down.

When asked if he regrets his resignation from LG, he said, “Not at all, because it went well for LG after I left.”

The Twins finished the regular season in fourth place and made it to the second round of the postseason, before losing in four games to the Nexen Heroes.

Kim said he actually had considered resigning when the team fell to the Doosan Bears in the first round of the postseason in 2013, blaming himself for the loss.

Then, when LG had a losing streak in April, players shaved their heads to show their determination and loyalty, saying they would do better to keep Kim, who was in the last season of his contract.

“I believe players should not play for the manager,” said Kim. “It only makes them perform worse, and I thought I was the one who should leave the team. It’s the same with the Kia Tigers. I won’t cling to something that won’t work.”