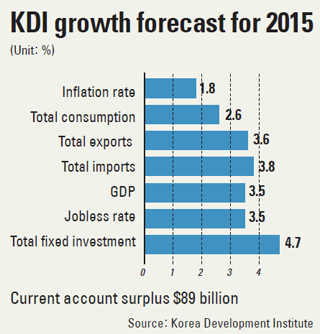 The state-run Korea Development Institute (KDI), which advises the government on establishing appropriate economic policies, released a 3.5 percent growth forecast for next year on Wednesday.

The projection is 0.3 percentage point lower than the think tank’s forecast in May, indicating its view of what the economy will do next year has gotten gloomier .

Its GDP growth forecast also is lower than the 4 percent estimated by the Ministry of Strategy and Finance and 3.9 percent predicted by the Bank of Korea.

And the KDI said there is a possibility economic growth may not reach its forecast if risks increase in the global economy.

“There are greater uncertainties in projecting next year’s growth at the moment,” the report said. “The 3.5 percent growth forecast is the most optimistic projection on a presumption that the global economy will grow 3.7 percent, as the International Monetary Fund has predicted, without any problems in the planned quantitative easing measures in major economies.”

“The economy seems to be coming out of the shock from the Sewol ferry disaster, but the pace of recovery remains sluggish overall,” said a KDI researcher. “The problem is that private spending, as well as business investment, is still anemic.”

The deadly ferry sinking off Korea’s southwestern coast in April left more than 300 people dead. Ordinary people refrained from spending as they were shocked by the tragedy, resulting in a slump in private consumption for the next few months.

Due to expected improvements in global trade, exports will continue to grow and post another record current account surplus, the report added. Based on the projections, the think tank said the government will need to maintain its expansionary fiscal policy for the time being.

“Along with the current expansionary fiscal policy, the government needs to carry out reform of the public sector, including debt restructuring of public corporations and public pensions, spreading its economic innovation initiative from the public sector to the private sector,” it said.

Despite the prolonged period of low-inflation, inflation rates are likely to fall further, according to the report.

“If low inflation continues, the effect of monetary policy could be limited as there is not much room for the real interest rate to go down,” the report said. “The central bank should show its determination to reach its target inflation rate, while acting more aggressively to contain downward pressures.”

In October, the central bank projected the economy will expand 3.9 percent next year, which is 0.1 percentage point lower than an earlier projection, saying the government’s fiscal expansion might keep the economy afloat.

The Ministry of Strategy and Finance is currently working on its 2015 economic policy direction plan, which is expected to include a revised growth outlook for next year.

According to experts at the KDI and private institutions, the government will have to lower its previous economic outlook, which many believe is too optimistic.

On Wednesday, Choi Kyung-hwan, deputy prime minister for economy and finance minister, said at a forum that momentum for economic recovery remains weak.