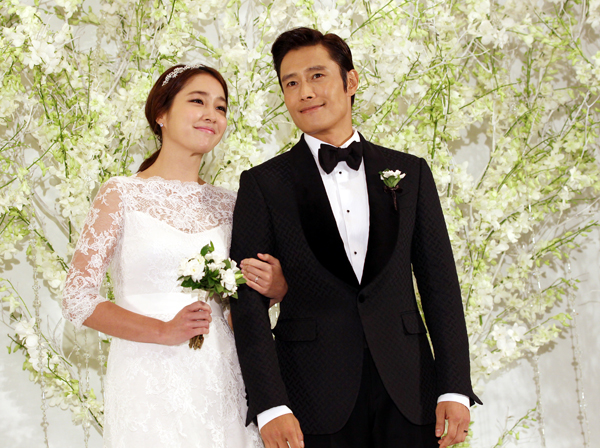 Actor Lee Byung-hun and his actress wife Lee Min-jeong left for Los Angeles together on Saturday.

Lee, who has been appearing in Hollywood films such as “G.I. Joe: Retaliation” (2013) and “Red 2” (2013), went to the United States to discuss his next projects in Hollywood. His wife is reportedly accompanying him so that the two can spend some time together.

The couple got hitched last year and the ceremony stole the spotlight. It was dubbed the marriage of the century because both Lees had reached the height of their acting careers.

But their marital life has not been rosy. Lee is currently involved in a legal battle against two women who allegedly blackmailed him for 5 billion won ($4.5 million).

The case began when model Lee Ji-yeon, 25, and Da-hee, 20, a member of the girl group GLAM, were accused of threatening to release a video clip of Lee in August in which he is allegedly drinking alcohol and using lewd language.

In previous trials, the model asserted that she was in a romantic relationship with the Korean Wave actor. Lee has denied all of her claims.

Since the legal case is under way, gossip has spread in the media about Lee and his wife. Some news outlets said actress Lee was staying with her parents, a sign that the relationship was on the rocks.

But news that two left the country together has squashed rumors somewhat.

The next trial is set to take place Tuesday.

Lee’s next project in Hollywood is “Terminator: Genesis,” in which he teams up with Arnold Schwarzenegger.

The film is slated to open in North America early next year.