Ailing Bryant nets 32 to lift Lakers over the Kings

Ailing Bryant nets 32 to lift Lakers over the Kings 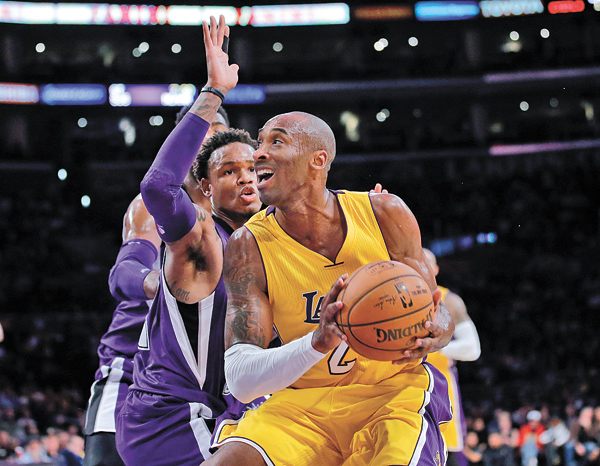 Kobe Bryant of the Lakers, right, is pressured by the Sacramento Kings’ Ben McLemore during the first half of a game on Tuesday, local time, in Los Angeles. [AP/NEWSIS]

Even when his legs are shot and his whole body is exhausted, Kobe Bryant can figure out ways to will the Los Angeles Lakers to victory.

It helps when the opponent struggles down the stretch as much as the Sacramento Kings did, though.

Bryant scored nine of his 32 points in the final 3:14, leading the Lakers’ fourth-quarter comeback for a 98-95 victory over Sacramento on Tuesday night, local time.

Carlos Boozer added 15 points as the Lakers snapped their three-game skid by rallying from a 12-point deficit in the second half. They grinded out a win with a fourth-quarter effort led by Bryant, who managed to conserve just enough energy to take the Lakers over the top.

“I’m hurting,’’ Bryant said. “At halftime, I just lay down and try to put myself mentally in a place where I just block it out and come out and play.’’

After Bryant tied it at 92 with a breakaway dunk and a clutch 3-pointer, Jordan Hill’s layup on a pass from Bryant put the Lakers ahead 94-93 with 1:39 to play.

The Kings went back in front on a driving layup by Darren Collison, but Bryant hit two free throws for the lead with 34 seconds left. Rudy Gay and Nik Stauskas missed 3-pointers in the final 18 seconds for Sacramento, which has lost six of eight.

Nick Young had 12 points for the Lakers. They have won just three of 12 home games this season, but have won 12 of their last 13 at Staples Center against Sacramento.

“Sometimes you’re going to have to win games that are ugly,’’ said Lakers Coach Byron Scott. “We didn’t exactly make shots on a consistent basis, but we made big shots when we had to.’’

Collison scored 26 points and Gay had 23 for the Kings, who went scoreless in a four and a half minute stretch. Sacramento managed just 14 points on 5-for-17 shooting in the fourth quarter.

Meanwhile in Ohio, LeBron James scored 35 points, making the tiebreaking 3-pointer with 48 seconds remaining, and the Cleveland Cavaliers rallied to beat the Toronto Raptors 105-101 for their eighth straight victory.

Toronto, which owns the best record in the Eastern Conference, went ahead midway through the first quarter, built the lead to 14 points late in the third and still led by 10 with about eight minutes to play.

“I guess it was a little desperation,’’ James said. “You get down on your home floor 13, 14 points, you go out there and control what you can control. That’s how hard you play, how hard you defend. The defense got our offense going.’’

James’ jumper from the top of the key gave Cleveland a 102-99 lead and tied him with Mark Price for the franchise record for 3-pointers at 802. James scored 10 points in the fourth, when Cleveland held Toronto to 13 points.