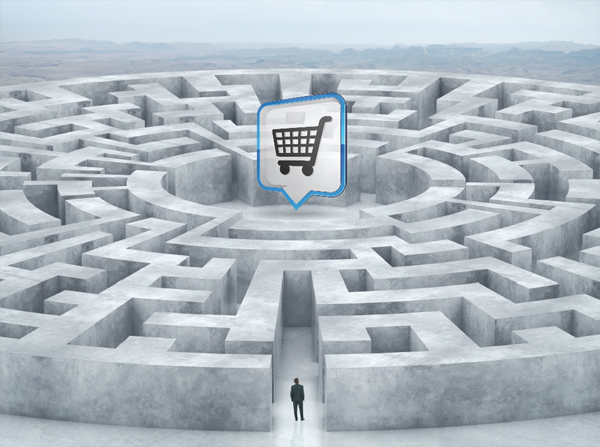 In a seven-hour cabinet meeting in March about easing regulations, President Park Geun-hye chastised ministers for not allowing Chinese consumers to buy a coat seen on the hit drama “My Love From the Star” through online malls.

The remarks were directed at the complex payment system required for Internet purchases, which prompted legislators to approve a streamlined alternative. Faced with a growing number of Koreans buying through overseas retailers, the president continues to champion the importance of attracting foreign shoppers to local e-commerce sites.

An ever-increasing number of Koreans are shopping at foreign sites. But the hurdles foreigners must deal with when buying from Korean sites has resulted in rapidly widening the retail imbalance.

Major retailers including Interpark and Hyundai Hmall have jumped into global e-commerce by setting up their own versions of online malls in multiple languages. However, visits to the new sites and interviews with users reveal that many of the sites are poorly developed, with mediocre translations and complex and limited payment options.

The global pages of Interpark and Hyundai Hmall list all of their descriptions in Korean, as well as some color and size options. The English version of Interpark has refund and exchange information for some products, but it’s also written in Korean.

A 44-year-old identified as Timothy lives with his Korean wife in the U.S. state of Delaware. He tried to order food and red pepper paste on one of the Korean sites, but he eventually gave up.

“My wife and I were really looking forward to using those sites, because we often buy Korean food,” he said in a phone interview. “But the English-version shopping malls were really disappointing. The products were explained in Korean and the stated shipping date was too long.”

Hyundai Hmall, for example, says international shipping takes three to 10 days and maybe longer, and no refunds or exchanges are allowed. Timothy added that the red pepper paste he was seeking was not available on the foreign e-commerce sites, including Interpark’s, though it is sold on the local website.

A representative of Interpark said the company is working to expand the number of items it offers. “Since we opened the site just this year, there is still room for improvement,” said the representative, who asked to remain anonymous.

But while Korean operators scramble to make their websites better, global e-commerce giants such as Amazon draw international shoppers with shrewd marketing techniques and speedy shipping.

The total amount spent on overseas shopping last year surpassed 1 trillion won ($909 billion) for the first time. In the first half of this year alone, Koreans spent 753.8 billion won at overseas online malls, a 48.5 percent increase over the same period last year. The Korea Customs Service estimated total spending could surpass 2 trillion won this year. Only about 500 billion won was spent just four years ago. Credit card purchases via websites and physical stores abroad increased 15 percent in 2013, according to the Bank of Korea. 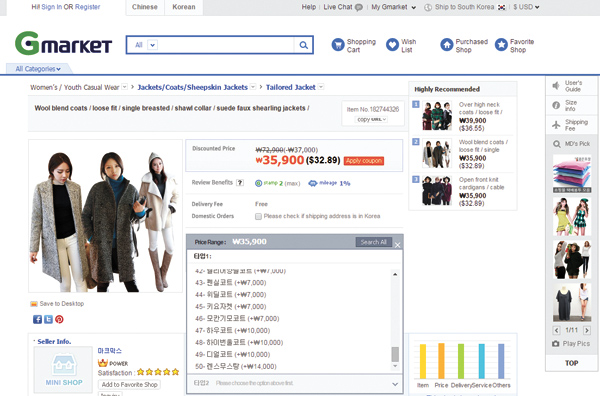 A screen shot of the Global G-Market website shows options written in Korean. Some foreign customers complain that Korean shopping websites are cumbersome and don’t provide information in English.

On the other hand, spending by foreigners on Korea-based e-commerce sites was a meager 370 billion won last year, the first year that such data was recorded.

In October, the Korea Chamber of Commerce and Industry (KCCI) issued a report encouraging local merchants to target online shoppers overseas. The report shed light on the e-commerce boom around the world, particularly in China and Southeast Asia.

The total amount of direct purchases made from foreign websites in China was worth $35.2 billion, about 35 times more than in Korea in 2013. The KCCI estimated that the value would increase fourfold to $120 billion in 2018.

Given the explosive growth, KPMG, an international audit company, predicts the e-commerce market in China could be bigger than France, Germany, Japan, the United Kingdom and the United States combined by 2020. Thanks to the Chinese people’s engagement with online malls, the Asia-Pacific region is set to overtake North America as the world’s largest regional e-commerce market, reaching more than $525.2 billion this year.

Korean retailers are planning to target the world’s second-largest economy: China. Yet the service at some online malls is far from satisfying for Chinese shoppers.

OKDGG is a Seoul-based open market site that features women’s clothes from Korean online malls and brands. Its Facebook page, however, is filled with complaints from disgruntled Chinese consumers, mostly concerning late deliveries with no notification and no responses to emails or calls.

“Please help me with [my] refund,” wrote a customer surnamed Pey. “I have sent plenty of emails as well as called the center, but it seems like no one will pick up or reply.”

Another consumer reported a complaint about a specific shop, but there was no comment from the company below the post.

“The shop IPPNGIRL delays orders all the time without any notice,” the post read. “It is a very irresponsible shop. I recommend that you take this shop out from your list.”

Although the open market was designed to specifically serve foreign consumers, the vast majority of products are described in Korean.

Even if foreigners use an online translator, many pages don’t allow for cutting and pasting due to formatting issues and concerns about image theft.

The same goes for the English versions of larger e-commerce sites such as G-Market and 11th Street. G-Market is operated by eBay Korea, but mostly sells goods from Korean merchants. On online forums, foreigners share “tutorials” about navigating the intricate ordering process on G-Market Global.

Clothing, apparel and footwear are the leading categories of goods for cross-border shoppers on G-Market. But the number of styles and color options makes ordering difficult.

“When the clothes come with tons of options, that makes the selection process really complicated,” said a 23-year-old man named Li living in China. “Each item has a different code and after choosing what you want to have, you need to go to the option section and find the matching code. If the code or product name consists of English or numbers, that’s better. But some items have Korean names. In that case, I need to write down the name and go up to the option section and find the matching Korean code, which is really irritating. ”

Another customer named Huang also complained about G-Market’s service. “I made my purchase last month and paid in full for the item and shipping,” he said. “I never got any updates, and after a week I sent them a message to ask about the status. I sent two or three messages and tried to download the live chat service to ask about my status, but I couldn’t install it due to a compatibility issue.”

Huang said many disgruntled foreign consumers of G-Market Global flocked to the Facebook page to express their complaints, but the comments have been blocked. Unfazed, some customers post their complaints below as status updates.

Many Korean e-retailers say most of their customers are Chinese, but many offer limited payment options. Interpark, for example, doesn’t accept UnionPay cards, which are used by 80 percent of Chinese online shoppers.

“We only accept Visa, MasterCard, PayPal and China’s Alipay. But we are considering embracing other payment systems,” said an Interpark representative.

Still, there have been some improvements. In line with the government’s efforts to embrace a simpler payment system, many online shopping malls discarded the cumbersome authentication system known as ActiveX that required a hefty set of program installations.

The Ministry of Science, ICT and Future Planning and the Financial Services Commission are on their way to authorize multiple payment technologies. Big retailers such as home-shopping networks and popular cosmetics brands have also tried opening shops on Alibaba’s Tmall Global Platform.

“To open a shop on Tmall, foreign companies undergo a complicated process,” said Jin, an operator of a women’s fashion shopping mall. “It costs a lot of money. So I gave up in the middle of the process.

“The government keeps saying that retailers should target the Chinese market, but the rhetoric sounds hollow because it doesn’t provide any support programs.”