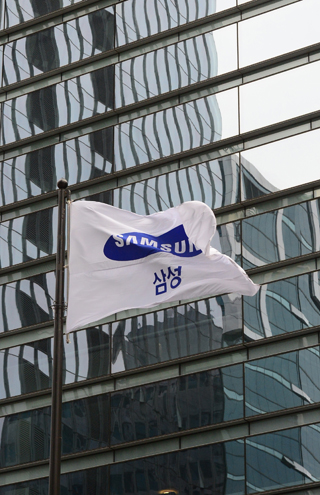 Samsung Electronics slimmed down its overseas operations and dismantled the Global B2B Center and Mobile Solutions Center at its headquarters in Seoul to restructure its organization.

This was the first major reorganization the company has undergone since the vice chairman and heir apparent, Jay Y. Lee, took a more commanding role after his father, Chairman Lee Kun-hee, suffered a heart attack in May.

Samsung Group said Wednesday that the company’s main framework will remain the same. There will still be three divisions - consumer electronics (CE), information technology and mobile communications (IM), and device solutions (DS) - which are managed under three independent CEOs.

But the sales operations of the Global B2B Center will be taken over by the IM division, which had been focused on smartphone development. The strategy function will be integrated into the Global Marketing Office (GMO).

The flagship company of the nation’s biggest conglomerate said the integration of the Global B2B Center into the mobile communications division will enhance synergy.

“We decided to move the B2B sales business to the wireless business under the mobile division because we want to focus on growing the mobile B2B business,” said a spokesman for Samsung Electronics. “By securing more B2B personnel at overseas corporations and expanding the organizations, we plan to continue boosting our B2B capacities.”

Earlier, Samsung Electronics has made aggressive moves in targeting the U.S. B2B market in order to make up for the slumping wireless business of its mobile division.

On Nov. 13, it concluded a strategic partnership with BlackBerry to provide mobile solutions for companies.

The company’s Media Solutions Center (MSC), responsible for media content and services in the mobile division, was dismantled after six years. Parts of it will be merged into the mobile communications department while others are being moved to the Big Data Center or elsewhere in the company.

The MSC was established in June 2008 as Samsung tried to strengthen its creation of content with the ambition of creating a Korean app store.

However, compared to the success of its hardware, its content business has suffered in performance. As smartphone sales level off, it is even more difficult to expect positive results from the mobile content business.

Samsung decided that it will dissolve the MSC and move its Big Data Center to its software center, while sending its wireless business to the mobile division. Its overseas corporation, MSC America, based in Silicon Valley, will close and will be merged with Samsung Electronics in North America.

The company for consumer electronics in New Jersey and the mobile business in Dallas will be merged as one corporation in New Jersey. Jay Y. Lee has also been more aggressive in stepping up the company’s non-smartphone businesses, such as software, parts developments, cloud computing and the Internet of Things (IoT).

Although Samsung slimmed down its overseas corporations and mobile content business, the restructuring was subtle compared to expectations that it might execute a massive shake-up that downsized the IM division.