Show shapes space for all in theater

Show shapes space for all in theater 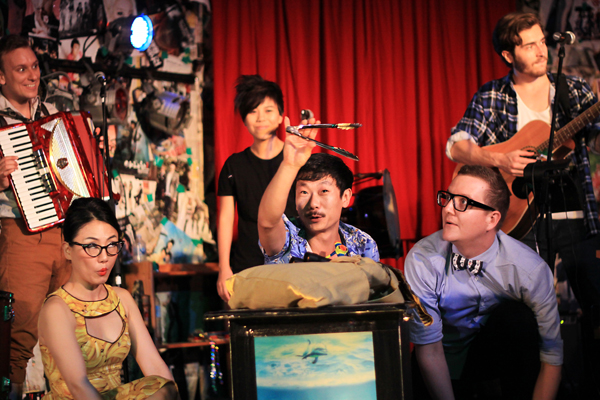 The music theater performance “Jiha-Underground” by Motherboard Productions of Australia is a collaboration between the nation and Korea. From left: The show features Jeremy Neideck, Lee Chun-nam, Park Young-hee, Tak Ho-young, Thom Browning and Abe Mitchell. Provided by FenLan Chuang

The performing arts world has recently put more stress on collaboration. Most of the time, however, partnerships have focused on exchanging artists or inviting directors from other countries to work on a local production or vice versa.

But Dave Sleswick, director of Motherboard Productions in Australia, says true collaboration has to start from “the artwork” rather than from politics or forming diplomatic relations.

“Collaborating with other cultures is about forming friendship and letting art come out of that,” says Sleswick. “I don’t understand why you would do it in the first place if it’s not about something meaningful or a genuine interaction. It seems meaningless to me if the starting point is something else.”

Sleswick’s Motherboard Productions produces joint works between artists from Australia and Korea. By organizing trans-cultural performances, Sleswick says he wants to create a feeling that is “inclusive and welcoming” and makes any type of audience feel welcome and at home. 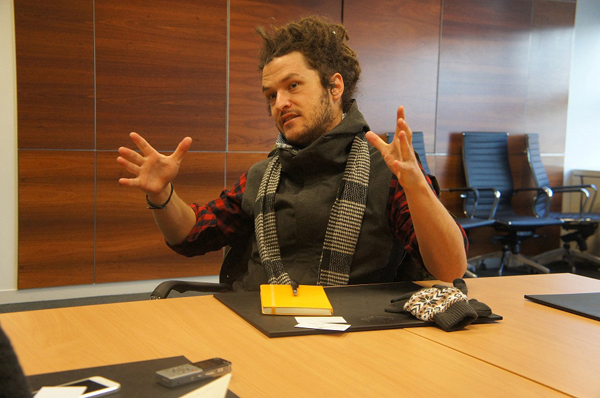 Sleswick and four other Australian producers visited Korea last week to participate in the first Asian Producers’ Platform Camp, which was held in Seoul. The camp was initiated this year for producers working in Asia’s performing arts community to communicate, exchange ideas and form collaborations.

“What we are trying to do is put together a network of arts managers and producers who are able to communicate more freely across both geographical borders and also cultural borders,” said Sleswick.

“We are having regress discussions about how we work closer together. I guess in the room, I am one of the people who has been doing it longer and have more ground experience in this kind of trans-cultural collaboration.”

Sleswick has brought two Korean-Australian performances here that are “true collaboration works between the two countries,” he says.

To hear more about the shows, the Korea JoongAng Daily sat down with Sleswick last week at the Australian Embassy in central Seoul.

A. The first one is “Jiha-Underground.” Jeremy Neideck, who is with Motherboard, directed and co-wrote the project with another artist called Nathan Stoneham. We invited three Korean performers to Australia to begin working on it in 2011.

Essentially that project was born out of everybody’s real-life experiences working between Australia and Seoul. We recreated an underground drinking bar by making the stage really look like a Hongdae-inspired bar of Seoul. We invited the audience into this bar, and for the first half an hour, we would drink and eat with them and serve them food.

And then, what emerged out of that environment, was a performance. We, the bar staff who are actors and musicians, told a love story that spanned between Australia and Korea. It was the idea of being transient and falling into a space where you are not at home. You find yourself in other places, and there’s constant searching for direction. The story included a queer love story as well.

So the premier was in 2011 in Australia, then we were invited to do it again in 2012 at the Brisbane International Arts Festival. We got asked again to present it at the World Theater Festival at the Powerhouse in Brisbane. Then we came for the Hi Seoul Festival this year. When Jeremy first came to me with the idea, the idea was to make it in Australia by inviting Korean artists. Our dream was to one day bring it to Korea.

What is the message of the work?

A huge part of the work is that there are characters who are queer, who are homosexuals and who are transgender. We didn’t point that out really loudly, saying that this is a big statement, but there were also people in our work who were Koreans, who were straight, who were musicians and actors.

This community of performers all coexisted together in a really safe and welcoming environment. So the idea was that we would make a space where our audiences, whether they are Koreans or Australians, whether they are queer or straight, would come in and be safe and welcomed and at home. Because I noticed that Korean audiences in Australia, they would never go to a theater show because it was so non-inclusive for people from different cultures. It was similar for the trans communities as well. They would not feel comfortable to go out in public in that kind of way.

You said the show is a sell out every time. Why do you think people are drawn to it?

People feel welcomed. People want to be there. When we are making performing arts works, so often there’s a distance that is created between the art and the audience, where they feel like they are a witness of something as opposed to a part of something.

More and more we are trying to start to change that in our own heads when we make work. We continue to ponder the question of how to model a society where we are all happy, where we are all welcomed and everyone’s included.

You’ve held the show in both Australia and Korea. Did you see any differences in the responses of the audiences from the two countries?

Koreans were a lot more vocal. There was an element of heckling - the shouting out and cheering. We invite the audience to do that from the very beginning of our performance. So Koreans totally got on board a bit more.

I think, culturally, Australians can be a little bit more laid-back, so Koreans were a lot more energetically invested. One of the interesting things - and we knew this would happen - is that when one of the heavy queer content came up, there was a different kind of energy from the two different audiences.

In Australia, when there’s a scene where two men kiss on stage, everyone will cheer positively. But from Korean audiences, it was more like cries of astonishment. They were shouting out, “No, oh no,” which of course wasn’t judgmental or anything, but it was a different level of acceptance.

But that’s the reason we do it - to show audiences that even though there are two men kissing, it doesn’t matter because that’s also love. It’s equality and acceptance.