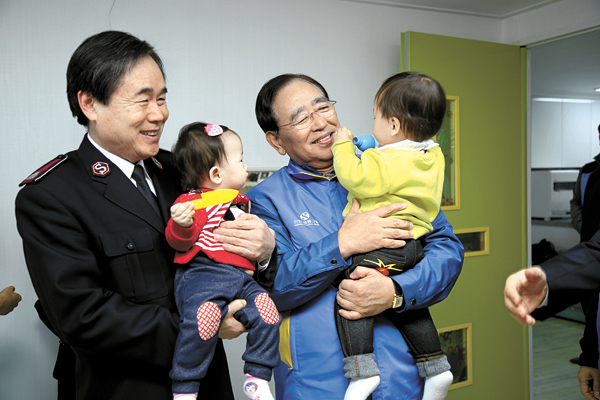 Winter is much harsher for those who don’t have a secure shelter. That is why Shinhan Financial Group visited the Salvation Army Broadview Children’s Home, an orphanage in Cheonyeon-dong, northeastern Seoul, last Tuesday.

The number of children who need shelter is increasing, but the rooms are packed. There are currently 83 children residing in the children’s home.

In addition to the group’s chairman, Han Dong-woo, employees and executives from Shinhan affiliates as well as university students who benefited from Shinhan Financial Group’s scholarship foundation repaired rooms in the orphanage and took care of the children.

The chairman also handed 100 million won (about $90,000) to Park Jong-deok, commander of the Salvation Army Korea Territory. The money will be used to remodel worn-out rooms and deliver Christmas trees and presents. The money will also go to renovating a storage room in the building so it can serve as a living space to 15 children. Additionally, nine rooms will be equipped with new walls, flooring and repaired facilities.

The group annually visits poor neighborhoods in the winter and has been delivering briquettes or kimchi to needy houses since 2008.

Shinhan Card employees have also begun their volunteer duty ringing bells beside Salvation Army’s Christmas kettles in Myeong-dong, central Seoul. They hope to inspire passersby to donate for people in need until Dec. 23.

Shinhan Investment Corporation will invite children from Taebaek, Gangwon, to the financial camp, where the company will provide various programs that help participants learn about finance and the economy.

Shinhan Life Insurance workers will also visit the children’s shelter with snacks and make Christmas cards with the children.

“We spend very meaningful hours sharing warmth with our neighbors,” said Han. “Shinhan Financial Group will continue the movement to take responsibility as a member of the community.”