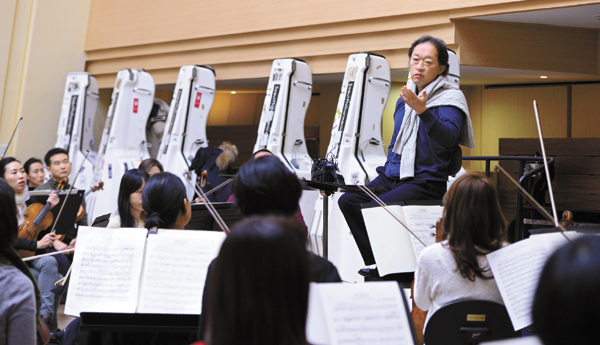 Chung returned to Seoul early Wednesday morning from Vienna, where he was participating in rehearsals for other recitals.

Chung discussed allegations surrounding the organization’s president, Park Hyun-jung, whose employees have accused of sexual and verbal harassment, with about 100 orchestra members before starting rehearsal, according to Yonhap News Agency.

Chung said he had been alerted more than a year ago about Park’s conduct toward her staff. “[I heard that] she would call in staff members and scold them severely, treating them without [respect or dignity],” he continued.

He went on to explain that “some employees said they would put up with her attitude, but then they began to quit one after another.”

Chung added that he could not tolerate her behavior any longer and had told Seoul Mayor Park Won-soon about six weeks ago that he would quit unless Park was expelled.

Mayor Park received a petition from Chung on Oct. 14, signed by several employees from the Seoul Philharmonic Orchestra, that called for Park’s ouster. The Seoul Metropolitan Government announced that the mayor had since ordered officials to take up the matter for investigation.

Concerning Park’s accusations against Chung, he said, “Ridiculous words [concerning myself] circulated after Park’s interview with the media, but if I really did anything wrong then the truth will be revealed.”

Park stated in a press conference earlier this month that she could not tolerate the maestro’s “inefficient management and overgrown bureaucracy.” She added that the orchestra was being operated like Chung’s private club rather than a city-run orchestra.

“I’ve already quit the post until the things get solved,” he said.

Park came under fire on Dec. 2 when 17 employees in the administrative department of the Seoul Philharmonic Orchestra released a statement claiming that Park had violated their personal rights by using vulgar language. They also accused her of sexual harassment.